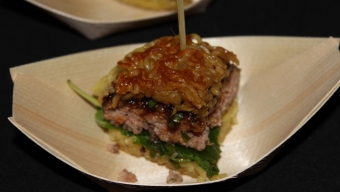 The Gohan Society is an organization that is focused on the appreciation of Japanese culture in the United States and honoring the country’s approach to culinary traditions, methods, and as Thursday evening would show, its innovations. Serving as a repository for the education and historical aspects of Japanese cooking methods, ingredients, and techniques, The Gohan Society would bring some of New York City’s most highly regarded Japanese restaurants and chefs into Williamsburg’s Brooklyn Brewery for a truly unique food tasting celebration. The three hour festival entitled “Aki Matsuri”would offer incredible silent auction experiences, a soba noodle making demonstration, and a live taiko performance, alongside some of the City’s finest eats for a three hour extravaganza raising funds for The Gohan Society’s continued expansion.

Guests lined the Brewery’s entrance with anticipation shortly before “Aki Matsuri’s” 6:30pm start time and after whisking through coat check, we found ourselves walking past each of the three aisles of participants and ordering up one of ten Brooklyn Brewery offered beers during the event. With pours of Brooklyn’s “Sorachi Ace” in hand, we immediately began doing some food tasting. As the list of restaurants was announced, we circled one specifically on our list and with tremendous excitement we approached the sought after food sample known only as “The Ramen Burger.” Yes, Keizo Shimamoto, who for months and months was the talk of New York City with his inventive showing at Brooklyn’s Smorgasburg, would have his own station at “Aki Matsuri,” serving up 1/4th sized portions of the makeshift burger that utilizes Sun Noodle ramen discs as the patties. The enveloped burger patty doused with secret sauce was every bit as delicious as we’d hoped, but surprisingly the other participating restaurants were up to the task of matching Shimamoto’s penchant for mouthwatering fare.

While some of the food samples were of the traditional Japanese variety, others were truly unique. In an unorthodox move, Park Avenue Winter and Quality Meats paired up for an outstanding “Cheeseburger Onigiri,” which featured an all beef cheeseburger cased in two thick white rice patties topped with a fiery jalapeno slice. Morimoto meanwhile was serving some of the finest bone marrow that we’ve ever tasted. The “Miso Glazed Roased Bone Marrow” was doused in a chimichurri and was easily pulled from its bone shell and spread atop a crunchy crostini. The otherwordly flavor was decadently rich and candidly, we could have recreated a skeleton with all of our repeat trips to their table and the bones that we rifled through.

“Aki Matsuri” would have been virtually incomplete without some freshly prepared sushi. Soba-Ya‘s methodic soba noodle making demonstration admittedly brought us over toward their table, but their “Soba Sushi”- using buckwheat noodles instead of rice- proved to be a taste revelation. Complimented by a squirt of soy sauce and a creamy white drizzle, the fresh noodles were somehow even tastier than the chilled shrimp that was the dish’s focal point. Also worthy of praise, Blue Ribbon Sushi did a masterful job of made-to-order “Hand Rolls” with fresh tuna and salmon occupying our empty hands. The finished product was everything that sushi in New York City is supposed to be, but seemingly never is- an absolutely delicious sample. We’d be remiss in avoiding some of the other truly memorable offerings from “Aki Matsuri” as Torishin‘s “Chicken Charsiu,” Nobu‘s “Shabu Shabu with Nobu Sauce,” Dassara Ramen‘s “Sesame Szechuan Cold Noodle”and finally, Hakata Tonton‘s “Berkshire Pork Confit” which was unbelievably savory and perfectly fatty for our taste.

Although we failed to win any of the evening’s silent auction or raffles, the 2013 “Aki Matsuri” was a seamlessly run event that provided such indescribable delicious food that we look back with regret at the many meals wasted by not visiting enough Japanese restaurants. The vibe inside of Brooklyn Brewery was one of utter jubilation from start to finish, and for the value of tasting all of the chefs’ phenomenal offerings, and an endless array of tasty Japanese sake, whiskey, and wine, you’d be hard pressed to find a more fun and fulfilling way to spend an evening in New York City. To the organizers of “Aki Matsuri,” we lift our glasses to you. Kanpai!