The Village Voice Delivers the Brews with ‘Brooklyn Pour’ 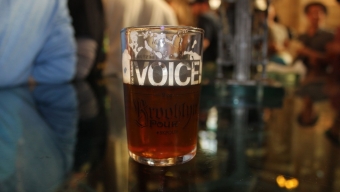 The now annual craft beer fiesta known as “Brooklyn Pour” returned to the sprawling space of Skylight One Hanson in Fort Greene Brooklyn on Saturday afternoon to the utter delight of hundreds upon hundreds of thirsty beer swilling connoisseurs. The 2013 festival was primed to be the most exciting one yet, bringing more than 100 different breweries into one incredible space along with some local food purveyors doling out for purchase fare in the place’s basement area. With so many distinctive flavors of beer on hand, it was easy to get lost in the sudsy shuffle, but we made sure to arrive early and arrive ready for an afternoon of serious imbibing in our favorite borough.

Since we secured our VIP access as ticket holders, we were fortunate to head up to the sectioned off mezzanine area, equipped with exclusive eats and brews unavailable elsewhere during the event. We quickly grabbed pours of Sierra Nevada “Pale Ale” and Bear Republic’s “Black Racer IPA” to wash down the hearty multiple bite ‘Brooklyn Brat Sliders,’ tender and bulbous, served on a thick salted pretzel bun. Following some additional bites courtesy of Sigmund’s and the friendly folks at Ovelia Psistaria, we headed back downstairs to mingle with the increasingly large crowd. What the Village Voice does perhaps better than any other outlet is manages to host events that seem to be massive undertakings and make traversing the space easy and lines short for guests, because the array of options are so vast. Such was the case at “Brooklyn Pour” as we were not forced to wait for a single beer throughout the course of our day, journeying to each of the three levels in the building.

As the calendar turns to a new season, so do the more seasonal beers and as such, there was a preponderance of pumpkin beers and ciders on hand as well as Octoberfests aplenty. We made sure to grab pours of these at just about every pouring station because once we hit November, they immediately become harder and harder to come by. Among our favorites that we sipped upon were Heartland Brewery’s “Smiling Pumpkin Ale,” Smuttynose Brewing Company’s “Pumpkin Ale,” and Chelsea Brewing Company’s “Chelsea Pumpkin Pie.” But our hands down favorite came from Middlebury, Vermont’s Wolaver’s Fine Organic Ales, whose “Organic Pumpkin Ale” had all of the elements of a great flavored beer- great nose and subtle hints of pumpkin spice without being overly sweet. A close second goes to Brooklyn’s own Kelso, who was celebrating their very first foray into being sold in aluminum cans, and was pouring delicious “Industrial Pumpkin” samples alongside their “Kellerfest.”

We’d be remiss if we failed to mention the other outstanding ales, lagers, and pours that we excitedly slurped down at this year’s “Brooklyn Pour” which featured a slew of new beers that we had tried for the very first time. The clean, crisp flavor profile exuded by Weihenstephan’s “Hefeweiss” was a delicious revelation, becoming our first spot that we targeted for return visits. Speaking of repeats, we probably had two full beers worth of pours from our pals at The Bronx Brewery, whose “Rye Pale Ale” is every bit as good as their American style “Pale Ale” and belongs on any must try list. Alphabet City Brewing Company’s “Easy Blonde Ale” was also surprisingly tasty, light enough to remain all-day beer in terms of drinkability- not a common characteristic among most craft beers. We also made sure to hit the international pours of the likes of Asahi and Singha, as well as local newbies Harlem Brewing Company and Queens Brewery, along with old faithful- Brooklyn Brewery.

From familiar names like Samuel Adams, Magic Hat Brewing Company and Harpoon Brewery to ones like Grimm Artisanal Ales, Mendocino Brewing Company and Olde Saratoga Brewing Company, which we had just learned about, there was something for every drinker’s palate at this year’s “Brooklyn Pour.” An event that’s so often imitated, it’s nearly impossible to taste everything that you’d like to, but grabbing together a group of buds for an afternoon of boozing in Brooklyn is something that we’d sign up for year after year. And while the next “Pour” is about a full year away, The Village Voice returns with anther spectacular event in December (12/5), with “Holiday Spirits,” which surely gives us yet another reason to look forward to the holiday season.