The Other ‘Fall Food and Wine Festival’ at Metropolitan Pavilion 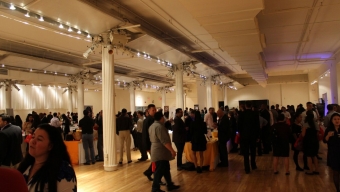 Allthetastesofnewyork.com is a website that takes food pretty seriously, bringing an array of inspired food crawls to different neighborhoods. Attendees pay for an affordable ticket and then travel to three different area restaurants for each course. Thursday evening, the website hosted a food crawl of sorts under one roof with the “Fall Food and Wine Festival,” not to be confused with the weekend long festival currently in full swing in and around New York City.

The sprawling Metropolitan Pavilion would play host to the initial event, bringing together eats from close to a dozen restaurants and small shops alongside wineries, spirits purveyors, and beer distributors, all doling out samples to the hungry mass of guests. With three hours of consuming ahead of us, we began quickly surveying the lay of the land and started with some pours of “Pinot Noir” from Brotherhood Winery. America’s oldest winery (it’s true, we asked) based out of Washingtonville New York, was the only functioning winemaker during the days of prohibition, producing bottles for use in churches. The Pinot was delicious- light bodied and soft, and a nice contrast to their “Cabernet Sauvignon,” which was complex and dry, and delightfully barrel-aged. Just a few steps away, we also enjoyed The Naked Grape’s “Pinot Noir,” which was fruitier and smooth, a good value for its under $10 retail price.

With tastes of wine in hand, we began to load up on some of the food on hand with our first stop at Agozar. The Cuban restaurant on Bowery brought out four different samples and a mighty refreshing red sangria to boot. Their “Arepa” was the standout for us- with seasoned shredded beef atop a sweet and fluffy corn arepa cake. But the grilled shrimp “Alambre” and “Grilled Chorizo” doused in chimichurri were equally noteworthy. Other highlights included the Moroccan style “Merguez Sausage Sliders” from east village haunt Nomad, Bourbon Street‘s “Jambalaya,” and Spice‘s tasty “Chicken Satay” draped in a delicious curry peanut sauce.

After enjoying N.45‘s “Arancini Ball” and a plate of their “Lasagna,” we were off for more imbibing and found our destination with full pours of international beers. Peruvian brew Cusquena and Italian Peronis were among our favorites, primarily because the pours were full and the beers were smooth and drinkable. And speaking of drinkable, Legend of Kremlin‘s grain vodka was a refreshing take on the typically cringe worthy alcohol. Crisp and refreshing, the clear shot went down incredibly easy as did the additional sips of Los Arango, a wonderfully delicious sippable tequila with two varieties- the “Blanco” and the smoky “Anejo.”

Despite a preponderance of hearty dishes, the show stealer at the end of the day were the sweet desserts that rounded out the three hour event. First, the inventive folks at Sweet Dreams who brought with them a mini doughnut factory, pumping out freshly made mini “Ciroc Donuts,” served piping hot and doused in powdered sugar. These were absolutely incredible and forced us to return time and again like we had a drug habit. With a sugary rush, we then encountered Dana’s Bakery, whose homemade American style French macarons were equally as eye opening. Sporting flavors like “Peanut Butter and Jelly,” “Girl Scout Cookie,” and “Cotton Candy,” these bite-sized delicacies were absolutely fantastic and we were forced to bring some home for our pals.

The first ever “Fall Food and Wine Festival” was a complete success for both the attendees and the participating businesses. We tasted some new foods courtesy of restaurants that we had heard of but hadn’t yet patronized and sipped on some tasty wines, beers, and liquor samples to make sure we got our buzz on. For a full list of upcoming crawls, events, and cooking classes, do yourself a favor and check out allthetastesofnewyork.com and take a bite out of your neighborhood.