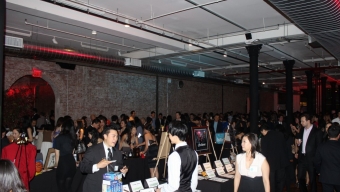 The chic and spacious second floor area at 82 Mercer was transformed into a cultural epicenter of Asian inspired New York City eats on Friday evening as national volunteer organization Project by Project would bring some of the City’s finest purveyors of food and beverages under one roof in celebration of their annual gala event. Entitled “Plate by Plate,” each year, the New York City chapter partners with a different non-profit group and helps to raise money, raise awareness, and improve their outreach in the community. With a focus primarily in the Asian-American community, the 2013 “Plate by Plate” event would be held on behalf of the Film News Now Foundation or FNN, a group centered around powerful and enlightening documentaries that bring to light both contributions and social injustices that affect Asian Americans. And although the evening served to highlight some fantastic dishes, the event’s overriding message was both inspiring and enlightening.

With perhaps the largest and most diverse collection of silent auction items that we’ve ever seen, we entered the posh main space 82 Mercer. The surrounding walls were lined with table after table occupied by local restaurants serving a cavalcade of distinctive fare as well as different beer, spirits, and sake purveyors running the gamut from Tiger Beer to Bombay Sapphire mixed drinks. The evening kicked off with a friendly Mixology competition emceed and judged by FOX 5′s own Ti-Hua Chang, just as guests began arriving and posing for photos at the step-and-repeat near the front entrance. Background music courtesy of house DJ’s ‘Re-Mixologists’ paced the entirety of the evening, allowing guests to bob their heads in between grabbing the delicious food samples.

As far as the food being prepared and served at “Plate by Plate,” the absolutely whirlwind of eats really leaves us questioning where to begin. Tasting Cherry’s “Mangalista Pork Macaron” (yes, they brought a pork macaron!) was a revelation like nothing we’ve tasted before. The succulent pork flavor within the sweet and subtle casing of a bite sized French macaron was an utterly fantastic effort by the newly opened Chelsea area restaurant. Similarly mouthwatering was the “Lobster Taco” courtesy of Bell Book & Candle. The three-bite slices meshed hunks of tasty lobster meat with an outstanding green avocado tomatillo drizzle atop the taco’s soft white shell.

The dish that seemed to be getting the most praise from the guests that we spoke with was Yunnan Kitchen’s “Smoked Yunnan Spiced Beef.” Seasoned by black garlic and poppy seeds, each plate was adorned with two perfectly prepared strips of medium rare steak which despite being served chilled, were tender and delicious. Other standouts included Shigure’s “Roasted Duck” with pickled Oriental melon, Thalassa’s creamy and sweet “Lobster Pumpkin Bisque Kataifi,” Yerba Buena Perry’s “Tacos De Costilla” with savory short rib and Edi and the Wolf’s “Lightly Torched Arctic Char” plated in a single bite stack with hints of mustard, horseradish, and apple. We washed it all down with refreshing drinks from Murray Hill haunt Middle Branch, Tito’s Handmade Vodka and even pours of VOSS Water to make sure we were well hydrated as the event progressed.

Bringing out so many fantastic restaurants and their corresponding chefs is the most effective way to garner the attention of collective New Yorkers and Project by Project certainly managed to disseminate their message during the event. Whether guests would learn more about FNN at the creatively positioned Microsoft Surface tables with headphones or during the speech portion of the event wherein the guests were welcomed to 82 Mercer, the focus of the 2013 “Plate by Plate” was loud and clear. And we also managed to gain a new-found appreciation for the talented and spirited members of the Asian American community- from the guests to the chefs to the event sponsors and event runners- who are deserving of all of the accolades that they receive as a result of hosting such a fun and interactive evening of culinary delights.