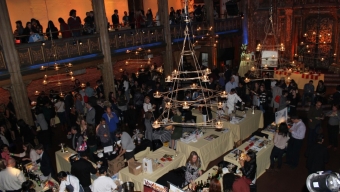 In its third outstanding year, Edible Manhattan‘s now annual food meets travel event known as the “Edible Escape” descended upon the truly unique Angel Orensanz Center in the Lower East Side on Tuesday night. Attended by hundreds of guests, the 2013 “Escape” would bring together dozens of restaurants, wineries, and dessert purveyors under a singular, ornately designed roof for their biggest event of this caliber yet. And with eclectic flavors from places local (Long Island and the Hudson Valley) and international (Austria, Portugal, Mexico, Japan), the only thing that the “Escape” would be short on was places to sit.

The Angel Orensanz Center is among the finest and most distinctive venues in New York City with its three tiered setup all flashed by a different color scheme. The “Escape” would take over the ground floor and second level, which provided ample space for guests to pose for pictures down on the swarming crowd of hungry eaters waiting to sample the evening’s best tastings. Edible Manhattan tapped some outstanding local restaurants to play a role in this year’s event utilizing Brooklyn, Manhattan and even some Long Island chefs for the occasion. Now, it was imperative to arrive on time at the “Escape,” as any seasoned attendee is fully aware as it is not uncommon for restaurants to run short on food before reaching even hour number three. So while those running late may have been out of luck, we made sure to arrive early and arrive hungry to fully experience everything that this year’s event had to offer.

East Village haunt Bobwhite Lunch and Supper Counter is known citywide for its take on comfort food and its “Homemade Pimento Cheese Sandwich and Brunswick Stew” was no different. I can’t remember the last time that I enjoyed a sandwich on white bread, but this one was packed with nostalgia- a basic cheese sandwich with a fiery kick- and every bit as delicious as I remembered. Just steps away meanwhile, Tres Carnes was doling out “Texas Style Smoked Pork Shoulder Tacos” on the first floor, proving why the outpost is becoming among one of the most sought after taco-makers in the City. Topped with a poblano lime ranch drizzle, the salty meat was lip-smacking smoky, joining some pickled red onions and wrapped in a fresh tortilla. The wait for the Tres Carnes tacos was only exceeded by the folks at Rocket Pig, whose “Rocket Pig Sandwich” richly combined spice rubbed chunks of pork on a ciabatta roll with red onion jam and a creamy mustard sauce. The sandwich happened to be the largest serving of the evening and was among the tastiest, but for our money, the highlight of the evening was Carroll Gardens’ Marco Polo Ristorante, who always seems to deliver when we run into their representatives at food events. On this night, their “Housemade Duck Ravioli” was served piping hot with a delicate coating of buttermilk pumpkin sauce. The dish uniquely combined the collection of flavors without being too rich or too sweet, and was in fact, just right.

At times the space did get a bit crowded and with the change in weather recently, it also managed to get a bit hot inside the venue on account of guests donning jackets. But once you had finished waiting on some of the longer lines, there was plenty of space to stretch out, whether seated on the lengthy risers atop the second floor or downstairs on the steps leading to the picturesque altar, a characteristic that makes the venue so very special. We paced the space seeking out different pours of wine and beers, enjoying ones that we’ve tasted (Brooklyn Brewery‘s “Lager” and “Brown Ale”) and ones we hadn’t (Radiant Pig‘s tasty “Junior IPA”). Upper East Side date spot Kaia Wine Bar had run short on their “Boerie Rolls” by the time we stopped by, but that didn’t stop us from sipping on refreshing pours of their South African “Cederberg Sauvignon Blanc.” The crisp finishing wine proved to be an ideal compliment to Fonda‘s “Mole Blanco,” a chicken dish over yellow rice and topped with a zesty white mole sauce.

Certainly, Ofrenda‘s “Arepa de Pato” which topped a grilled corn cake with confit, Edi & The Wolf‘s “Fried Goat Cheese Dumpling,” and Silvia’s Table‘s “Chickpea Ragout with Roasted Vegetables” were each worthy of high praise as were the dairy-free frozen dessert cups provided by DF Mavens as we neared the exit. We had our fill of tremendous local fare, some delicious beer and wine, and even some sticky caramels, which proved essential for our long walk home. For those of us looking for that perfect “Escape,” Edible Manhattan once again came through with flying colors.