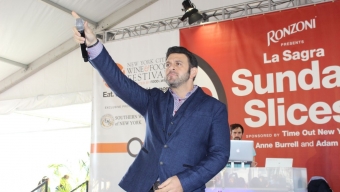 All weekend long, the Food Network New York City Wine and Food Festival brought some of the biggest stars and chefs in the cooking game to the forefront, delighting the thousands of fans and hungry eaters making their way to one of the dozens of events on Manhattan’s west side. Sunday evening as the Festival drew to a close, the Ronzoni sponsored “La Sagra Sunday Slices” emanated from the Pier 92 rooftop along the west side highway. Hosted by Man vs. Food’s own master of ceremonies Adam Richman and wacky-haired celebrity chef Anne Burrell, the three hour eating extravaganza would be a fun and festive outdoor evening, celebrating all things pizza- New York City style.

Accompanying the pair on their journey would be some of the City’s most notable restaurants- some of which are not necessarily even renowned for pizza making- alongside a selection of tasty beers, cocktails, and of course wines, to washy down all of the saucy goodness. Fortunately as the late afternoon event kicked off, the sun was shining brightly, to the delight of attendees donning sunglasses as they paraded around the enormous space, bouncing around to the top 40 hits being spun all afternoon by the house DJ. As the event commenced, we immediately began doing some tastings and were graciously and warmly welcomed by the folks at Scotto Restaurant. Good Day New York’s Rosanna Scotto was front and center doling out “Spinach and Cheese Calzones” from the family owned eatery and interacting with fans and friends. Meanwhile, the mini-calzone was delicious, joined by a side of sweet bright red marinara sauce to lap up the equal parts mozzarella, parmesan and ricotta cheese. On the other side of the event space, we also ran into a fellow morning host from NBC’s The Today Show where the attractive Lauren Scala was bouncing from restaurant to restaurant to film live updates from the event.

After roughly thirty minutes, it was time to introduce the event’s guest hosts and Richman and Burrell playfully argued with each other in front of the live audience. While a large crowd gathered, plenty of folks stuck to their spots in line, where restaurants like Motorino, Charlie Bird, and Forcella were drawing sizable lines. The pair stuck around long enough for attendees to take some pictures and could be found throughout the event walking around the Pier. Fortunately there was plenty for the crowd to do once they’d had their fill of food and drink with games like ping pong and corn hole strewn about the space, accompanying the German Biergarten setup of picnic table seating nearby. Desserts by the Betty Crocker booth and coffees from illy were also nearby to cap off an afternoon of utter gluttony.

The picturesque views of the waterfront only enhanced the experience of tasting so many distinctive foods outdoors, but make no mistake- “Sunday Slices” was absolutely about the pizza, which ranged from the traditional to the experimental. ReNapoli Old Greenwich used a 60 day aged mozzarella cheese on its “Sam’s Wicked Chowder Pie,” which combined chunks of little neck clams with potato and pancetta together inventively. Luzzo‘s meanwhile served slices of their “Pizza Margherita,” a more old fashioned approach with San Marzano tomatoes and fresh mozzarella. Similarly, Don Antonio by Starita also served a “Margherita” style, with a touch of extra virgin olive oil and some pecorino romano as well as a stand out variety that encompassed smoked mozzarella. What was truly fascinating was to glance at each restaurant’s sizable and distinctive wood burning pizza ovens, each of which exemplified the character of the chef and its corresponding restaurant.

Among the other meat-laden highlights were Michael White’s thicker styled pie from Nicoletta whose “Calabrese” was doused in fennel sausage and pepperoni along with roasted red onions, Numero 28‘s “Pizza ‘Numero 28,’” decorated with speck, mushrooms and homemade truffle cream, and Motorino Pizza whose exceptional “Picante Pizza” combined the likes of spicy soppressata alongside chili flakes, garlic, oregano, and fior di latte brilliantly atop a layer of tasty tomato sauce. There were also a variety participating restaurants that opted away from pizza and L’Apicio‘s “Squash Soup,” Quality Italian‘s “Mille Crepe,” and Arancini Bros.’ “Squid Ink Risotto Balls with Spicy Shrimp” were just a few of our favorites. But admittedly after a full weekend of enjoying all of the eats and the festivities that the 2013 Wine and Food Festival had to offer, we spent most of Sunday night taking deep breaths, loosening the top button on our jeans, and marveling at how everyone else around us was able to put down so much food and still look so thin and photogenic. The 2013 Food Network New York City Wine and Food Festival may have just ended, but now our brand new diets can begin.