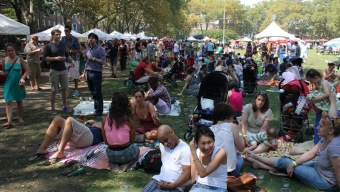 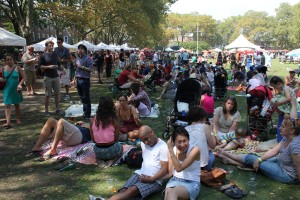 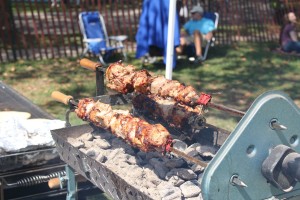 Whether putting together an instructional cooking event or a unique beer pairing experience at his East Village craft beer bar Jimmyâ€™s No. 43 or a widely attended outdoor event for hundreds of guest in each borough, restaurateur/entrepreneur Jimmy Carbone has certainly endeared himself to thrillseeking New Yorkers. On Saturday September 7th, Carbone continues his methods of localized philanthropy as his team at Food Karma Projects brings the 4th Annual â€œPig Islandâ€ to Red Hook Brooklyn. The Ikea Waterfront will play host to 25 different chefs each preparing variations on the four legged swine, snout to tail style in whatâ€™s certain to be the largest â€œPig Islandâ€ experience yet.

The now annual food tasting frenzy moves from Governors Island out to Red Hook in an attempt to give locals a taste of the picturesque waterfront area, still recovering from the ravages of Hurricane Sandy. And thereâ€™s perhaps no better way to bring 1500 guests to a brand new venue than with the promises of inventive fare, all-you-care-to-drink beer, ciders, and wines from local purveyors, and live music with the anticipation for a beautiful seasonal afternoon. And if the successful events held over the past few years are any indication, â€œPig Islandâ€ 2013 is sure to be one of the most creative and fun events as we wind the summer down.

LocalBozo.com had the chance to catch up with Jimmyâ€™s No. 43 owner and host of â€œPig Island,â€ Jimmy Carbone for a few minutes. Read below as we discuss the changes in store for this yearâ€™s event, the attention paid to locally sourced ingredients and raised pigs, the participating chefs involved, and just what surprises might be in store for first timers out to Red Hook Brooklyn. For tickets, check out this link- and if youâ€™re on the fence, just read our mouthwatering review from last yearâ€™s â€œPig Island.â€ If that isnâ€™t convincing enough, nothing will be! 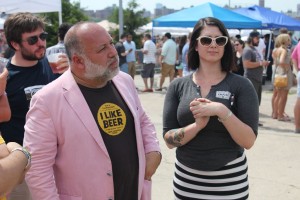 LocalBozo.com: On Saturday September 7th, Red Hook Brooklyn will play host to the 4th Annual “Pig Island,” presented by Food Karma Projects. With an event that seems to grow exponentially year after year, how did the idea for “Pig Island” get started?

Jimmy Carbone: In 2010, I co-produced the first big event version of “Meatopia” on Governors Island. The inspiration for â€œPig Islandâ€ was to go beyond a chef driven event, to focus on the actual farmers who are growing pigs on nearby small farms. So the event is- number one, about buying pigs locally and supporting the farmers and number two, giving the pigs to local up and coming New York City chefs to challenge their creativity with nose to tail cooking. So ultimately it’s about sustainability.

LocalBozo.com: This year the event changes locations to the Ikea Waterfront in Red Hook Brooklyn. Why the move from Governors Island and how is this outdoor site suited to host such a large event of this magnitude?

JC: Hurricane Sandy changed a lot for New York City, for Red Hook Brooklyn, and for our events. We’ve all needed extra support and a chance to regroup after that disaster. Getting people out to Red Hook has been a priority for the City. The New York Water Taxi , Ikea, and Sixpoint Brewery all wanted us to bring a special event to the Red Hook waterfront. Thus, â€œPig Islandâ€ is in Red Hook this year. We have continued to participate in events on Governors Island as well having produced food for the Jazz Age Lawn Parties during two weekends on Governors Island this year. Also, â€œPig Islandâ€ is far from a mega event like Brooklynâ€™s â€œThe Great Googa Mooga.â€ We expect 1500 foodies who will have an amazing day on the Red Hook waterfront.

LocalBozo.com: There are upwards of 25 different chefs each creatively prepping pig-inspired fare. Who are some of the notables participating this year- and who’s dishes are you most excited for?

LocalBozo.com: Almost all of the events thrown by Food Karma Projects are all about local and sustainable farming to produce different dishes. It’s certainly something that’s vital for our state but probably something that gets relatively lost in the shuffle considering the day to day concerns of an average citizen. How did you initially get involved in the advocacy for locally raised animals and produce and do your events serve almost as reminders of things that New Yorkers should be more aware of?

JC: We arenâ€™t perfect but we do care deeply about supporting local farmers, working with Slow Food NYC and the Grow NYC Greenmarkets quite a bit. â€œPig Islandâ€ is our key â€˜all local food and drink event.â€™ Weâ€™ve gotten more involved with New York ciders from Cider Week NY and will have hard ciders in addition to New York state wine and craft beers. Itâ€™s a tough question but is also just another reason to buy tickets to â€œPig Island.â€ We buy pigs from local farmers and challenge up and coming New York City chefs to work with the whole animal.

LocalBozo.com: You’ve got all day music, cooking demos, beers from Sixpoint as well as local wines and ciders and a ton of food. Is 5 hours going to be enough time to see it all?

JC: Well it’s a focused day- a walk around tasting of the 25 chefs plus four bars with beer, wine, and cider AND you can join us afterwards this year at select Red Hook bars and restaurants. After all. one of the focuses this year is to get people out to Red Hook.

LocalBozo.com: What’s historically the biggest challenge for you in putting the entire event day together?

JC: Sourcing the pigs is the biggest challenge. The timing is important. And the farmers depend on the money.

LocalBozo.com: Can attendees expect any surprises in store at “Pig Island” 2013?

JC: There are always last minute additions- restaurateur Zarela Martinez (Zarela) is coming back to cook alongside some culinary students. Also, the Ikea/Red Hook waterfront is one of the best in the city so be prepared for an awesome waterfront afternoon. And the chefs always go above and beyond- we’ve had pork desserts, appetizers, soups, some barbecue- it’s more of a 25 course pig tasting menu than anything.

JC: We’ll have some exclusive New York Water Taxis leaving from South Street for our advance ticket holders only. Red Hook is a great community and a lot of people want to see it make a comeback after Hurricane Sandy. 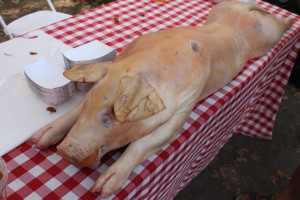