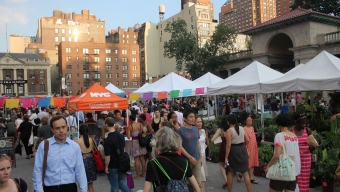 On the 37th birthday of the Union Square Greenmarket, the collection of outdoor vendors joined forces with some of New York City’s notable restaurants for a one time, weeknight celebration called the Union Square Greenmarket Night Market. The four hour event brought hundreds of gatherers to the area to enjoy live music, a makeshift beer garden, and delicious vegetables, cheeses, and meats on sale from a variety of local farms. Organized by the folks at GrowNYC, the advocacy group forges relationships with farmers and volunteers to work toward promoting fresh locally grown produce for New Yorkers.

Although the event officially kicked off at 4pm, we arrived as the sun was beginning to descend and the Night Market was still fully packed. Unfortunately though because of our delay, fare from the likes of Monument Lane had just run out as we had arrived. There was plenty of other cuisine to pick on however and we paraded around the open space seeking out the shortest lines. Union Square Café’s “Peach Turnovers” and Telepan’s “Blueberry Crescents” were among the sweet handheld confections being prepared, while fast casual salad shop Chop’t utilized local farms for their ingredients consisting of fresh goat cheese, grape tomatoes, Kirby cucumbers, amid a sea of Artisan lettuce, and topped with house made focaccia croutons and basil, mint, and chives. Back Forty and Back Forty West were shelling out “BBQ Pulled Pork Sliders,” “Sour Cherry Crumb Pie,” and a delectable “Chilled Lobster Corn Soup” while Hearth and Terroir’s “Freekah Salad” could be spotted all around us during the evening.

The beer courtesy of Brooklyn Brewery was also a nice touch with the “Brooklyn Greenmarket Wheat” being the exclusive beer of the evening. Using70% of New York State grown wheat and barley, the rich complex beer accented with an orange peel was light and bright, much like the Market’s surrounding environment. Sold at greenmarkets in and around Manhattan, local restaurants have also picked up the beer for distribution in Manhattan. Other participating eateries included a delicious “Fennel Salad” from Craft/Craftbar/’Wichcraft, Rouge Tomate, The Fourth, P&H Soda and more alongside the likes of Roaming Acres Farm, Cart in the Park, and a bevy of Union Square’s usual suspects.

The Wednesday evening market was a welcomed excuse to be outside, revel in summertime, and to enjoy the ingredients and local products created by farms and restaurants in our area. We walked the space for almost an hour, people watching and tasting some freshly prepared food, and also taking some time to hang out by a sea of skateboarders and musicians similarly camped out in the area. We wound up leaving with full bellies, a bag of cucumbers, and a refreshing lemonade, completing the seasonably comfortable July experience for those of us who decided to venture out and leave the confines of our tiny apartments.