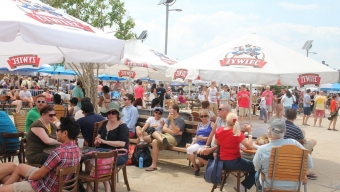 Hundreds of thirsty beer-drinkers used Sunday’s warm sunny afternoon as the perfect excuse to trek out to the picturesque Williamsburg waterfront on Saturday afternoon as July’s Good Beer Month was roundly celebrated in style.  The first annual “New York State Food and Beer Expo” brought dozens of delicious local beers and dishes to the open park space right next to Smorgasburg at East River State Park for a whopping nine hours of nonstop fun.

Temperatures swelled to comfortable levels on Saturday afternoon, enhanced only by ice cold pours of frothy brews.  Tents were erected around the entirety of the open space, each acting as mini host sites for the array of different craft beers.  Entry to the expo was an affordable $10, with beer tickets available for purchase inside the event at $6 a piece.  Meanwhile, grills cooking up fresh cheeseburgers, corn on the cob, and incredible smelling bratwurst set the stage for an ideal summer barbecue setting- farm to table style.  The Expo was well attended but the space was laid out perfectly so that there was no crowding or lengthy lines to speak of.  The day was strictly about tasting some delicious beers and enjoying one of those remarkable afternoons in Brooklyn.

There was a great variety of distinctive beers to taste and we began making the rounds almost immediately.  We stopped first at our friends from the Bronx Brewery whose “Summer Pale Ale” is as refreshing and hoppy as we had hoped from the masters of pale ale.  Tasty and subtle at once, we grabbed several pours from our bearded buddies.  Similarly outstanding was Blue Point Brewing Company’s “Summer Ale,” with hints of malt and citrus fruits.  The beer always is among our first tastes at summer drinking events because of its crispness and overall light flavor profile.  Inside the VIP area meanwhile, we got our first sips of Queens Brewery, whose pours from dark bottles of “Queens Lager” were rich and complex.  With new breweries popping up and representing every borough, the Long Island City outfit certainly seems poised to make a splash on the suds scene.

Other participants included the likes of Kelso, Rushing Duck, Empire, Sixpoint, and Captain Lawrence to name a few of the many notable names doling out cups.  With so many different beer purveyors on hand and during such a fun afternoon, it’s easy to lose sight of the big business the beer world has become and especially locally, to lose sight of its humble beginnings.  Fortunately, Beer Sessions Radio host and owner of East Village beer bar Jimmy’s No. 43, Jimmy Carbone was there to organize the event and in the middle of the day session, choreograph an award celebration to Empire Brewing Company’s David Katleski in recognition for his service as the President of the New York State Brewers Association.  The fitting “New York State Beer Hero” award was a stein, in beer lovers’ tradition, and was presented by New York State Assemblyman Joe Lentol.  Both men exchanged handshakes extolling the explosion of breweries in the area resulting from Lentol’s work politically behind the scenes and from Katleski’s role in helping to make beers more accessible and set a benchmark for similarly minded breweries to follow.

Though we didn’t last the full nine hours, we paraded around the space stopping to chat with some of the vendors, taking some pictures with other beer drinkers, and taste some of the fare courtesy of Black Tree Restaurant and Bar and Brooklyn’s own MDK.  We stumbled away from the Park with a good buzz on and a nasty farmer’s tan, but came away with the overall feeling that the country’s best brews, are made right here in New York state.