The Brooklyn Ice Cream Takedown Chills Out The Bell House 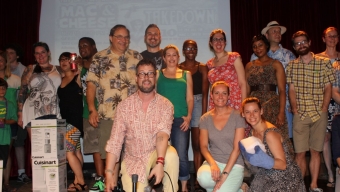 Hot times, Takedowns in the city! Sunday afternoon at Brooklyn’s The Bell House, ringmaster of “The Takedown” and budding local celebrity Matt Timms returned to his home turf for the 2013 “Ice Cream Takedown.” And on a July 4th weekend in the throws of a major heatwave everyone in attendance was happy to consume these homemade frozen creations.

Shortly after 2pm, a completely sold out crowd of Takedown veterans and virgins filed into the main room at The Bell House to sample thirty home cooks’ personalized versions of ice cream. As always Timms took to the microphone with heavy metal blaring in the background to deliver the important rules of the road for keeping the lines moving so everyone gets enough to eat. Our crew wasted nary a moment to get down on the action. Our first two stops were extremely indicative of how inventive these cooks truly have become.Â  The first was a “Blueberry Buttermilk Moonshine Sherbert” created by Daisy, a local “Takedown” favorite. Choosing to make a sherbet was a risk, with a blast of real blueberry flavors coupled with the unique finish of roasted corn. Mere feet away from this first tasting, we met the crew who created their take on “Mexican Chocolate Ice Cream.” Each bite combined sweet with heat in a satisfying manner.

These samples were followed by everything from a cannoli style ice cream cone to a passion fruit rendition with every base covered in between. Even former Supermodel and “America’s Next Top Model” host Tyra Banks made her way out to GowanusÂ to enjoy a hot summer day experiencing one of NYC’s coolest events. Once a short beer break was taken we jumped back on the line to sample the rest including the “Lemon Meringue Pie Ice Cream” from Alice’s Quarter Life Kitchen and the perfectly named “Butterscotch Beatdown littered with Chocolate-Covered Blondies.” In a day that was so brutally hot, getting an ice cream headache was totally welcome.

After the final scoop was cupped and quickly devoured it was time for the judging to commence. At every “Takedown” event there is a professional judging period followed by the chance for the people to have their say. The judges for Sunday’s Takedown were all power players in the world of ice cream. The judges included representatives from: il laboratorio del gelato, Phin & Phebes and Mikey Likes It Ice Cream. Their rankings were as follows: third prize went to the “Mexican Chocolate Ice Cream” second to, “Blueberry Buttermilk Moonshine Sherbert” and first to the “Butterscotch Beatdown.” When the people finally had their say they agreed with the judges and gave a second place prize to Daisy’s “Moonshine” and awarded the highly sought after first prize to the “Lemon Meringue Pie Ice Cream” from Alice’s Quarter Life Kitchen. Thanks to Matt Timms and his crew of killer home cooks, who sent everyone back into the heat a little more chilled out and extremely happy once again, longing for the next “Takedown” to make its way toward Brooklyn.