Edible Queens “Summerbeat” Heats Up The Night With Meat & Beer 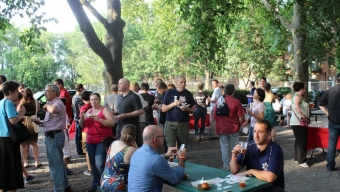 The Edible magazine franchise has expanded to Queens, one of New York City’s fastest growing boroughs. And with that they have fabulously continued the tradition of producing some truly fantastic seasonal events. On Thursday in the late afternoon we made our way to the neighborhood of Sunnyside for the newly launched magazine’s very first Queens oriented event, aptly named “Summerbeat: Eat Meat, Drink Beer.” We did both, eating and imbibing, as our full coverage below will attest.

At 5:30pm, the exclusive event kicked off inside of a beautiful community park where the event was being held on this humid July evening. And as soon as we arrived, the energetic spirit of the neighborhood could be felt almost immediately. With summertime in full swing, we decided to kick off this evening of imbibing craft beer and smoked meats with some dessert to cool us down. Luckily for us the folks at Malu Ice Cream were more than happy to oblige. This local creamery came with a truckload of especially sweet eats, but we opted to begin with a Shiraz wine infused chocolate variety. The first bite yielded a wonderful chocolate and nut flavor with a jolt of the popular red wine quickly to follow. As the cold dessert quenched the humidity, it was time to focus strictly on the brews and meats. The Bridge and Tunnel Brewery brought a cavalcade of cool t-shirts and were pouring a “Dunkel” that managed to be brilliantly dark and frothy while at the same time light enough for a summery picnic. A few steps away we encountered the recently opened Big Alice Brewing Company, a relative newbie to the brew business pouring cups filled with a “Sour Cherry Ale” that crammed everything we love about local farmers markets and highly drinkable beers into one glass. Needless to say we returned for repeat pours and also to check out the owner’s killer moustache.

After throwing back several pints, it was time to fill our stomachs. Our first foray into satiating our appetite came from the inventive folks at the LIC Market, who were roasting a duck on a spit to produce a tremendous “Pulled Duck Slider.” Topped with a sweet sauce, the rich flavor of duck meat paired admirably with the fresh bun as we gulped down our remaining suds to wash everything together. Next up was Astoria’s own Ovelia, an outfit that was similarly roasting an entire lamb on a spit. Once we sunk our teeth into a generous slice, we were simply blown away by its juiciness. With all this delicious saltiness under our belts it was time yet again to fill up on beer and the perpetually talked about Rockaway Brewing Company happily poured us a tall glass of their “Summer Ale” which was crisp, light and extremely flavorful, making it a terrific session beer at the beach, pool or wherever.

Whoever said, save the best for last must have foreshadowed the experience at Edible Queens’ “Summerbeat.” The park’s farthest corner housed the table from Arrogant Swine, the traveling Queens BBQ mavens who systematically and deliciously prepared a whole hog, pulled North Carolina style. And in a way to show some neighborhood unity, the group shared a smoker with Jackson Heights’ own Alchemy, Texas. The Alchemy crew cowboyed up with some seriously tender “Smoked Beef Brisket,” carved directly off the bone. The blissful meat was plated next to fluffy slices of white bread and a fiery ghost pepper infused barbecue sauce. Tangy and immensely spicy, the combinations proved outstanding at these dueling ‘cue stations manned by expert pitmasters.

After a few fun-filled hours of soaking up the remaining daylight and spending some time sampling all the delectable eats these great local businesses had to offer, it soon became time to call it a night. If Edible Brooklyn and Edible Manhattan’s history of pulling of fun and innovative events is any indication (and it should be), the Queens iteration is certain to be the next borough to be undertaken by Edible’s massive umbrella. Long gone are the days of visiting Queens for the Mets or for an old-fashioned beer garden. Long Island City and Astoria are just two of the areas exploding in the borough, but we’re certain that the folks at Edible will once again expose us to some new restaurants we’ve never heard of, in places we’ve never been. Follow the magazine’s constantly growing empire and everything they touch at ediblequeens.com.