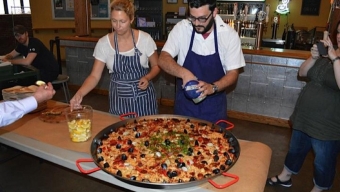 Endless seafood and beer? What combination could pair any better on a steamy summer Brooklyn evening? For those of us that attended Wednesday night’s “Pass the Paella” event hosted by Edible Brooklyn at Williamsburg’s Brooklyn Brewery, we got just that. Taking advantage of the Brewery’s expansive Malt Room, owner/chef Nick Suarez of Backyard Cooking Company and owner Theo Peck of Peck’s impressed eventgoers with paella built to dazzle one’s palette. With ooh’s and ahh’s, we joined the roomful of hungry guests and washed it all down with a variety of flavorsome ales provided by the Brewery.

We scurried through the sweltering, crowded streets of Williamsburg, knowing we would soon be refreshed by a Brooklyn Brewery “Summer Ale.” As we approached the giant logo adorning the side of the Brewery, we could taste the sweet suds on our tongue even before stepping inside. Founded in 1984 by Associated Press correspondent Steve Hindy, Brooklyn Brewery has become a well recognized craft beer producer across 25 states and 20 countries. And I’ve been personally stocking bottles of their “Summer Ale” in my fridge since the temps reached 70!

We quickly found our way inside right as the giant pans of paella began to make their first appearance. In the blink of an eye, we jumped on the line that had quickly formed and we were forced to wait patiently while sipping on our tasty brews. Unbeknownst to us, we had jumped on the vegetarian line. For those unfamiliar with paella, aside from the saffron rice, seafood and chorizo are the essential ingredients in this staple of Spanish cuisine. But candidly, the vegetarian version seriously pleased this carnivore. Asparagus, white beans, fennel and red pepper did the trick to almost turn us away from meat forever. This revelation may have been a bit premature however as a fresh pan of original, meat and seafood filled paella was carried toward our table. As we had learned earlier, this was an especially hungry crowd and no sooner did the heavy pan hit the table, when there was another line, now twenty people deep.

We bided our time by trying out another ale – this time the IPA, an ideal partner for our upcoming chorizo filled plates. We also snacked on “Carrot Salad” doused with a salsa verde buttermilk dressing as well as a tasty “Beet Relish” garnished with scallions as we awaited the arrival of the massive pan of fresh paella. A sea of mussels, cockles, chorizo, chicken and piquillo peppers rested on a steaming bed of yellow saffron rice. The rice was firm without being overly hard, and the seafood was incredibly fresh. The combination of peppers and chorizo was the icing on the cake. Always a paella lover, this was a piping hot delight.

Before long, we had eaten our fair share and I was looking for something to distract me from my full belly. I started reading up on the Backyard Cooking Company and became quite intrigued. Nick Suarez began his cooking career after winning The Great Hot Dog Cookoff in Brooklyn. Thanks to the likes of Bobby Flay, the chef made a career out of participating in various cook-offs and eventually joined forces with Theo Peck (fellow cook-off king) when they formed The Food Experiments, a group that affords amateur chefs the opportunity to show off their skills in a series of cook-offs. Expanding his horizons, Suarez decided to take on another challenge after successfully running his very own backyard crawfish cookout, and as such he began the Backyard Cooking Company. He offers parties both intimate and large scale catering to a cookout theme (think pig roasts, clam bakes, etc.). Important to note for us city folk is that a backyard is not always required for a Backyard Cooking Company party! Winding down the evening, feeling satiated and quenched, we decided to head back out onto the sticky city streets. The spacious air-conditioned Malt Room was a much welcomed respite from the heat and the food on hand was enough to keep us filled up for a full week. Once again, the partnership between Edible Brooklyn and Brooklyn Brewery has managed to pull off a distinctive and fun-filled event, exhibiting the local fare of an area entrepreneur. And although the paella may have been passed, we’re looking even more forward to our future crawfish cookout.