The 2013 Whisky Live Toasts To The Pier Sixty Faithful 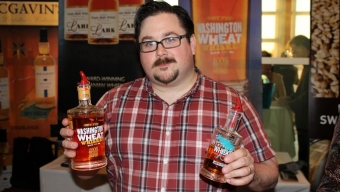 Here’s to that beautiful caramel colored spirit that has been enjoyed by everyone from cowboys to congressmen. Whether poured into tumbler or shot right down, both options are totally acceptable for whisky. It is a truly beautiful beverage and one organization’s trade show is going head and shoulders above the rest when it comes to appreciating the brown colored drink. For over a decade, “Whisky Live” has been presenting and pouring differing whiskies worldwide and in its ninth triumphant year, the grand show returned to New York City Wednesday evening, with picturesque views of the Hudson River emanating from Pier Sixty at Chelsea Piers.

Since launching in London and Tokyo thirteen years ago, “Whisky Live” events now take place in more than twenty cities across the globe. Almost as immediately as we passed through the Pier Sixty entrance we felt the show’s strong presence and impact right away. Nearly every square inch of the large space was filled with either a whisky producer or an attendee sipping in the goodness. Our crew wasted not a minute grabbing our “Whisky Live” etched tasting glass and headed toward our first table. We quickly made our way over to the previously unknown to us- “Dry Fly Distilling” booth which made us that much more excited to taste. We started with their “Straight Washington Bourbon 101,” which would provide a solid jumping off point to their entire catalog. The bourbon presented a bold nose that was equally as strong as its finish. This Washington state spirit captures the old school flavor one would expect from a bourbon but without the bells and whistles of additional flavoring mixed in. After letting the aftertaste dance on our tongues, we took a few more paces down the line to taste a little bit of Sweden. Surprised? So were we. “Mackmyra Whisky” comes directly from the snow covered winter wonderland, and its overall flavor profile matched this in kind. Our initial sip provided a warm, toasty yet not overly strong alcohol flavor. This whisky could easily be enjoyed on its own without mixers and paired with heartier foods like steak, lamb and even pork.

With our second tasting in hand we took a very short break to enjoy the house band, playing a combination of traditional Scottish standards mixed with cover songs like Pink Floyd classic, “Wish You Were Here.” With a song in our heart, we headed back to the tables and into the very capable arms of “George Dickel” and their fabulous rye variety. The very friendly team spent a nice chunk of time with us to explain how this rye is literally perfect for a traditional Old-Fashioned cocktail. We firmly agreed. It’s dry, yet smoky taste profile could easily mix with the sweet mix-ins that this classic cocktail is commonly associated with. In recent years, rye has stood out above many of the more popular straight whiskies and bourbons out there and “Dickel’s” is no exception to this rule. One would assume that “Whisky Live” would mean that eventgoers would solely be able to sip upon the guest of honor, but this was not true. A prime example of this came from the table of “Barrow’s Intense Ginger Liqueur.” Barrow’s is a lovely, highly drinkable beverage made with fresh ginger and absolutely no extracts or chemicals. It’s fresh and clean flavor is best enjoyed over plenty of ice, making it a distinctive and ideal drink for the upcoming warmer months.

I don’t know about you but the LocalBozo crew loves peaty flavored scotch-whisky. Luckily our craving could be satisfied from the good people at “Glenmorangie” and their ten year oak cask aged variety. Its pale gold color shined in the late evening sunlight with a nose that presented light notes of vanilla and citrus fruits. Its peaty flavor was joined by subtle hints of lemon, which tends to be amongst our favorites in terms of flavor profiles. This is seriously a scotch to keep on your liquor shelf for breaking out when you have guests over. The same can be said for “Whistle Pig” which is what I would call the most fun whisky of the evening. Our team is no stranger to this spirit, but they never fail to impress. The self made farm-to-bottle distillery produces a rye for all seasons and is best enjoyed on its own. Its ten years of aging is easily felt with each sip and is a serious pleasure from start to finish. The LocalBozo.com crew would also like to make mention of fantastic selections from: Crown Royal, Knob Creek and great brews from Belhaven Brewery.

As the hours rolled on we spotted the whisky faithful sniffing, sipping and repeating, around serving stations of the dinner buffet which included savory brisket, tasty chicken, and generous sides of pastas and vegetables. “Whisky Live” was an outstanding evening for delicious tastings, meeting the talented makers and learning the unique story of each brand. The best events fill you up both physically and mentally. And after Wednesday night’s event we can say that did both with great ease.