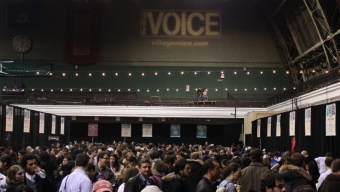 New York City plays host to a barrage of food tasting events every month, as any loyal reader of LocalBozo.com can attest. But every year, there is one event that sells out almost immediately based on reputation alone, combining more than fifty of the City’s outstanding restaurants serving sweet and savory plates, craft beers, wines, and liquors all inside of Manhattan’s massive Lexington Armory space. Tuesday evening, The Village Voice once again brought everything together under one roof with the 6th Annual “Choice Eats.” And as per usual, the lines formed early, the place was jam packed, and the tastes were plentiful and mouthwatering.

At an event of this size and caliber, being selective is imperative but often impossible. We once called “Choice Eats” a true exercise in gluttony, and that is perhaps the most appropriate description possible considering the number of notable eateries participating, with so many distinctive and inspired cuisines being represented. The VIP hour kicked off the evening at 5:30pm as guests descended the stairs to the Armory’s basement, quickly dumping off their coats and grabbing pours from Bulleit Whiskey and bites from the likes of SCRATCHbread, Sigmund’s Pretzels, and Beecher’s Handmade Cheese, with larger samples coming from from Pig and Khao and Qi Thai Grill. The bottom floor filled up quickly with media members snapping photos of hungry attendees jumping from station to station before the general event’s 6:30pm start time. A special gift bag grab later and it was back upstairs for “Choice Eats” to kick off in style.

Like a herd of cattle, attendees quickly filled the previously empty event space, almost immediately forming two lines at what’s typically become the most sought after dish at “Choice Eats” year after year. Despite being separated on opposite sides of the room, Luke’s Lobster and Red Hook Lobster Pound are seemingly always the first stop for veterans of the annual festival, serving up tasty halves of their chilled shrimp rolls. Eschewing any monumental waits however, we began selectively with some of our favorite staples beginning with The Meatball Shop. Their “Buffalo Chicken Balls” were soft and tender, and incredibly flavorful, topped with a smooth blue cheese dressing and Frank’s Red Sauce. Each bite managed to be surprisingly light, with a kick of spice on the back end- another stellar contribution by the expanding Shop’s chefs. Similarly, the always present Jimmy’s No. 43 was doling out delicious plastic bite-sized spoonfuls of “Bacon and Grits,” a balance of rich and salty flavors that again was more delicate than its hearty ingredients would indicate. We paused momentarily for some repeat pours by our friends at The Bronx Brewery, handing out their American Pale Ale and their Black Pale Ale amid a crowd of thirsty patrons, before heading back toward the restaurant tables.

Barbecue was again a usual suspect at the 2013 iteration of “Choice Eats,” with Filipino favorite The Kuma Inn slicing up a whole hog from head to tail just as the event commenced. We would return to their table time and again, to find just a few remaining body scraps by the end of the evening. Although it was dubbed a “Pastrami Slider with Cole Slaw,” John Brown’s Smokehouse of Long Island City, presented us a plate with a fluffy white bread triangle beside a bed of sweet slaw. The charred pastrami was absolutely delectable, ranking alongside Mable’s Smokehouse & Banquet Hall’s perfectly prepared slices of “Brisket” as the night’s most outstanding selections of ‘cue.

Many of the other outstanding notables all seemed to revolve around pork, as the pig was effectively the guest of honor at “Choice Eats.” But as far as flavors, it began and ended with Porchetta’s pork topped “Crostini,” with the toasted slices of bread playing second fiddle to the savory hunks of swine and crunchy skin cracklins. Speaking of Swine, the West Village haunt that shares the same name passed out a soft and salted “Country Pate with Tin’s Mustard” atop a sliced Pullman loaf, while nearby, Bill Telepan’s pint-sized sliders enveloped “Homemade Liverwurst” with pickled mustard between a halved rich cheddary bun. Both were unique and distinctive tasting in their own right. Our final ode to the pig came from Ditch Plains, whose time-tested standby “Ditch Dog” was plated above a bed of colorful taffy covering their table. The creamy macaroni and cheese covered hot dog half was decadent as always, filling us almost entirely as we set out toward more drinks and dessert.

With so many samples in the process of digestion, our stomachs swelled with pleasure. Our sights became set on sweet confections to close out the evening and we quickly grabbed a red velvet cake bite from Carlo’s Bakery (Yep, Cake Boss) of Hoboken and the eyes-roll-back-in-your-head sample of “Salted Crack Caramel” ice cream, courtesy of Prospect Heights’ Ample Hills Creamery, before our complete satiation was reached. A few pours of beer from the likes of Bluepoint Brewing Company, Sixpoint Brewery, and the familiar faces from Smuttynose later, and we found ourselves back where we began at coat check. Just like another year passing before we were fortunate enough to return to the Armory for another wildly successful “Choice Eats” event, the night had come full circle. And just as it seemed we had arrived, the event had reached its conclusion. Hopefully though, another year won’t feel like such a long time in between New York City’s most sought after food tasting event, again miraculously pulled off by the folks at The Village Voice.

Do yourself a favor- don’t wait another year to attend one of the Village Voice events. Tickets for the 2nd Annual “Choice Streets” (May 7th, 2013), offering the best in New York City food truck fare, are available now.