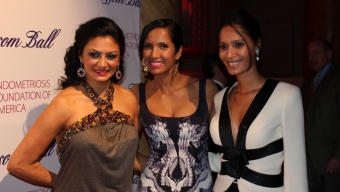 More than 176 million women around the world are affected by a painful disease that many of us likely cannot pronounce with any semblance of accuracy. Endometriosis is a currently un-curable affliction caused by the cells which typically line the uterus, appearing outside and lining the female abdominal cavity, causing an array of symptoms like extreme pelvic pain, fertility issues, correlation to certain cancers, and more manageable ones like inflammation and fatigue. With the education, research, and awareness of the complexities of the disease in mind, non-profit organization The Endometriosis Foundation of America hosted their now annual 2013 Blossom Ball on Monday evening at the Lower East Side’s Capitale, with the help of a red carpet rife with notable guests.

The 2013 Ball would be perhaps the most anticipated fundraising event for the group yet, as excited guests dressed from head to toe filed into the event space’s main lobby. The black tie optional evening would feature performances from legendary hip hop outfit De La Soul and DJ Miles Guthrie Robbins working the mix behind the closed doors of Capitale’s ballroom, coupled with cocktails, dinner and dancing inside one of the City’s finest lounge spaces. Attendees elatedly posed for pictures almost immediately, gawking at the star studded lineup of celebrities hoping to draw further attention to the EFA’s advocacy attempts.

In typical fashion, the red carpet was graced by the likes of Top Chef’s Padma Lakshmi, EFA Founder Dr. Tamer Seckin, and actress Susan Sarandon, each of whom are major proponents for the Foundation’s efforts in the battle against endometriosis and return as hosts of the event year after year. Despite her appearances on the small screen, Lakshmi in person is like witnessing a statuette as she gracefully posed for paparazzi and chatted casually with interviewers. Meanwhile, Top Chef co-judge Gail Simmons and former contestant and New York City renowned chef, Dale Talde (Talde, Pork Slope) also made their way past the photographers separately as the event’s commencement neared.

The worlds of film, fashion, and music were also thoroughly represented at the 2013 Blossom Ball. Actor Billy Crudup (Almost Famous, Too Big to Fail) and director Joel Schumacher (The Lost Boys, Batman Forever) made quick appearances on the carpet, before the aforementioned De La Soul, Blondie’s Deborah Harry, and the bluesy Gary Clark, Jr. strutted amid a sea of flashing lights. The beauty and elegance of models Genevieve Morton, Nicole Galicia, Lonneke Engel, and Mari Malek only managed to class up an already elegant affair.

With the rumblings of a full marching band making their way into the Capitale space through the front door, the red carpet and media portion of the evening had officially concluded, setting the stage for a night on the town for the room of philanthropic guests. Our space here is hardly the forum to fully detail the serious effects of this grave disease, especially when capturing the entirety of a red carpet scene and another wild night out in New York City. Make your way over to the Endometriosis Foundation of America’s website to learn more or to make a donation that can help directly impact the research necessary to combat the affliction that affects between 6-10% of women around the globe.