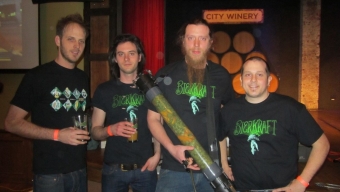 You love an ice cold brew right? Who doesn’t? But far too infrequently, we find ourselves perched atop a bar stool, ordering a variety of craft beer that we’ve never heard of or tasted, with our pursed lips bitterly disappointed with our selection. Luckily however, we happen to live in one of the greatest beer cities in the country, and as such, we are afforded an entire week filled to the brim with pure brew bliss! In celebration of all things beer, we find ourselves smack dab in the midst of “New York City Beer Week,” a ten day celebration throughout our area that runs through March 3, 2013. The overstuffed festivities feature different festivals, beer walks, beer dinners, specials and much more. On a mild Wednesday night, our crew made our way back out to City Winery for the fabulous “3rd Annual Brewers Choice,” one of the flagship events that really sends this outstanding week into orbit.

At 6pm with the afternoon sky still very much present, the doors to Soho’s City Winery swung wide open. Despite attending a tasting event here just one day prior, the winery’s main event room never ceases to amaze us with just how much they can pack into the highly ornate space. And after quickly grabbing a wine glass (classy) for pours, we headed to the tables where we immediately found one of our favorite and most innovative craft beer spots. Park Slope mainstay Bierkraft came to Brewer’s Choice locked and loaded. Ben Granger and his team brought what appeared to be a rocket launcher filled with hops and Buddha’s Hand, one of the strangest fruits on the planet. It’s odd appearance in the innovative contraption housed a Saison like none other, with a tap that poured fast and clean into our glasses. The beer was nothing sort of deliciously sour while being vividly complex. And after trying a second pour to capture it all, we tipped our caps to them and moved on down the line. The team from Cooperstown, New York’s Ommegang Brewery came to the event with the humorously named, “Gnomegang.” The Belgian strong pale ale is nearly 10% ABV, but is incredibly drinkable. Each sip yielded refreshing notes of citrus fruits and melons, making it a perfect summer brew that one can easily enjoy even during the dead of winter.

With a few prime brews in our bellies, it was time to move onto taste some of the food offerings. Just a stone’s throw from Ommegang sat the table of the West Village’s Blind Tiger Ale House, doling out huge chunks of pork belly slathered in a sour vegetable slaw, mixed with kumquats and doused in a savory sauce. On the upper level of the venue, the always fun and inventive team from Tchoup Shop served up a pork belly slider, topped with a ginger-sesame hoisin and handmade rice wine pickles. And to close up our eating adventure we headed over to one of beer’s best friends- the oyster. Eddie from Naked Cowboy Oysters was shucking a delightfully briny variety that tasted like a mouthful of the beach in the best possible sense of the word. If that wasn’t awesome enough, he even created a hot sauce that perfectly paired with the shelled fish.

After completing our decadent food tour, it was time to return to the tables and grab some pours to wash down all the savory pork. New Jersey’s Carton Brewing came across the river with two prime tasting selections. First up, their “Boat Beer,” a crisp IPA that transports you to the easy life was loaded with American hops and had a distinct grapefruit finish, while the “Gorp,” was a robust chocolaty porter that drinks like a meal. Their friendly representative informed us that the beer’s unique flavor comes from fermented raisins. And in keeping with the dark brews we spent a great deal of time hanging out at the Shmaltz table sipping their exquisite “Funky Jewbelation.” The old familiar faces were also out in support of the likes of Sixpoint Craft Ales, Kelso, Smuttynose, Allagash, Brooklyn Brewery, and our old pals at Bronx Brewery, each of whom was more than happy to kick around the beer related conversation with the excited drinkers gathered in front of each table.

In all, ”The 3rd Annual Brewer’s Choice” featured upwards of 20+ brewers and let’s just say by the end of the evening, we were completely stuffed, a little buzzed and all around pretty happy. Hosted by the New York City Brewers Guild, “Brewer’s Choice” on its own is a fantastically executed event, but is truly just a part of the entire beer week. There are still a few choice days to celebrate “New York City Beer Week,” so don’t delay. Head to their website and see what tickles your brew fancy.