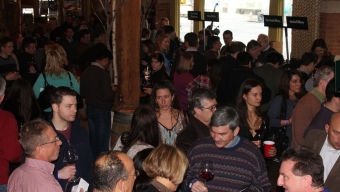 There is simply nothing better than getting a lot of what you love all from one place. And when it comes to wines there is simply nothing better than a healthy pour of a tasty Pinot Noir. There is just something so complex and perfect about it, making each sniff and sip better than the last. On Saturday afternoon, the LocalBozo.com team made our way over to the fantastic venue that is City Winery for “The 2nd Annual Pinot Days.” And after several shows of outstanding sampling we would never look at Pinot the same way again, and that’s a really good thing.

The sprawling City Winery space hosted over forty Pinot Noir producers from a multitude of different regions in California, Oregon and New Zealand. As big time proponents of the delicious red wine, we would have liked to try them all. But as the afternoon wore on, that certainly seemed like a tall order as we sipped and swirled pour after pour. Once the trade and media portion of the afternoon concluded, the three hour event opened up to the general public and swarms of likeminded wine lovers made their way inside the west side space. Guests were encouraged to grab one of the many large Pinot tasting glasses from a nearby countertop as well as any number of different varieties of Murray’s Cheese placed on serving trays around the room. What was especially noteworthy about the “Pinot Days” event was that we were afforded the opportunity to taste an outstanding collection of wines from the west coast without having to travel out to the likes of Sonoma or Santa Barbara County to do so.

As far as tasting events go, the City Winery space was as perfectly set up as any in recent memory. The spacious bi-level area was perfectly laid out so that even hundreds of gathered attendees had plenty of room to move around and converse with the wine producers. One of our first tastings of the afternoon session came from a winery with an ominous name. The mysterious Pinot equipped with a non-descript label with black writing may have been named “Wrath,” but after sampling each of the four types of the Santa Lucia Highlands produced vino, all we wanted to do was praise it’s peppery nose and dry earthy finish as we especially enjoyed the “Ex Anima” and the single vineyard “Boekenoogen.”

A quick trip up the small staircase put us smack dab in front of the folks at Inman Family Wines based out of Santa Rosa. The mother-daughter team on hand brought a delightful “Russian River Valley Pinot Noir”which proved to be among the most drinkable of the afternoon. Other favorites on hand included MacMurray Ranch’s “Russian River Valley Pinot Noir,” an earthy, cherry and spice meshed sample that was rich and complex, Dundee Hills’ “Sokol Blosser Pinot Noir” with a flavor profile highlighted by blackberry and black cherry, and finally the Gloria Ferrer “Carneros Pinot Noir,” a floral aroma laden wine that tastes like the heart of the fall season, with a touch of pomegranate for good measure.

However you decided to spend your Saturday afternoon on the weekend before The Big Game, you’re unlikely to have enjoyed it unless you were inside the confines of City Winery alongside your buds at LocalBozo.com. We paraded around the room, schmoozed with some of the most talented wine producers in the country, and met some likeminded wine drinkers with far more refined palettes than we’d ever take credit for. The event was both informative and filling leaving even rudimentary sippers of wine to glean a great deal of knowledge about how these wines are creatively culled and produced. And it gave the more refined experts the chance to finally have meaningful conversations with the people that can speak their language. We just sat back and took it all in stride.