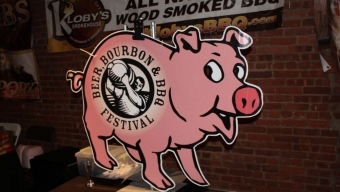 On the tail end of what was one of the coldest weeks on record, New Yorkers truly deserved a break. A reprieve came from our southern brethren and we couldn’t be happier to cross the Mason Dixon in order to get out of this deep freeze. That’s right friends, the “Beer, Bourbon and BBQ Festival” returned to NYC’s The Tunnel/La. Venue to put some south in your mouth while getting perfectly tipsy on craft brews and spirits.

As with every year, two outstanding four hour sessions were held inside of the fun, spacious venue. During the afternoon it was all about the bacon and the people who love eating and making it for “The Bacon Bash Tasting Session.” The LocalBozo crew however opted for the evening session which was all about the whole hog- “The Whole Gog Pig Pickin’ Session.” As immediately as we entered the vast west side space, the scent of expertly slow smoked pig wafted in the air. At that moment we truly felt at home. Inclusive in each ticket price was a food ticket and as such, as soon as we arrived, we jumped on line for the most inventive barbecue dish of the entire session. Kloby’s Smokehouse made the trip up to New York City from Laurel, Maryland for the Festival, filling up mason jars with layers of baked beans, thickly cut pulled pork, and cole slaw, topped with a green tomato. Each heaping spoonful meshed the collection of flavors together in an incredibly satisfying way. And the mason jars became keepsakes had you been able to clean the tangy sauce from your glass.

Once we devoured a base of delicious ‘cue, we sought out some familiar faces from the beer community. As such, we looked no further than our old pals at The Bronx Brewery. Pouring samples of their excellent American style “Bronx Pale Ale,” we were also able to finally taste the “Black Pale Ale,” thick and frothy, but infinitely drinkable. After a few brews were downed we felt a tap on our backs. Was it someone trying to get passed us or an old friend? Neither, it was one of the over the top representatives from the Hudson Valley Distillery with a bottle of their signature corn whiskey in hand. He was thrilled to pour samples and we were more than happy to grab several slugs from our glass. Other highlights included Samuel Adams “Alpine Spring,” a light, crisp delicious seasonal beer that was intense and flavorful, Sixpoint’s excellent “Signal” IPA and their American stout “Diesel,” and Smuttynose Brewing Company’s “Finest Kind” , a fine tasting, light bodied pale ale.

Without touching on the dozens upon dozens of other beers and bourbons, you would be hard pressed to find as festive and unique a tasting event in New York City. The Festival’s touring road show continues on through the spring and summer months and is worth traveling for if you plan on being in Georgia, Maryland, North Carolina, or Virginia this year. Live music, heaping portions of food, and tasty pours of delicious brews, topped off with rare and delicious bourbons from around the country, all made for an outstanding evening session of “Whole Hog” goodness. The only downside is that the 2014 iteration is such a long ways away.