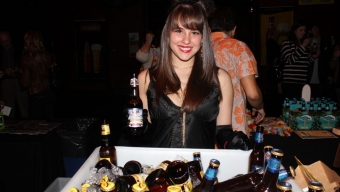 The rich history of Webster Hall is often overshadowed by the parade of artists that grace its iconic stage. Built in 1886, the versatile venue has housed a who’s who of legendary artists for over a century. Inside of a club once owned and run as a speakeasy by Al Capone, Saturday saw the clock turn back inside Webster Hall, to the 1920’s for the venue’s first ever food and whiskey tasting event, creatively titled “East Ville Des Folies.” Four floors encompassing craft and microbrews from around the world as well as dozens of whiskeys, from the familiar to the non-traditional had guzzling drinkers throwing their heads back and toasting their glasses for the entire three hour session. And with a reasonable price of just $35, it’s no surprise that the event was completely sold out.

We made our way past a very talented young flapper up on stilts who was there to greet guests on the brisk moving line that jutted out onto the East Village street. Once inside, we were handed our commemorative tasting cup for the afternoon and were then met with seemingly endless possibilities for where our booze filled journey should begin. We began with the hard stuff and quickly sought out the Bookers table. Bookers has the designation of being the only true bourbon bottled straight from the barrel. Aged six to eight years, we enjoyed the pleasant cherry-filled notes that each sip would provide. We also grabbed tastes of the Whistle Pig Rye, Widow Jane Whiskey, and the Four Roses: Bourbon, which left us with some explosive, full-bodied flavors and a spicy finish. Once we had sufficiently made our whiskey rounds, it was time to seek out some choice ales and headed upstairs toward Webster Hall’s Grand Ballroom.

In the same room that is usually reserved for headlining rock bands sat a multitude of tables featuring a laundry list of quality brews. Up front and center on stage sat a 1920s style band appropriately dressed for the decade, performing some outstanding renditions of American standards and serving as a fun little backdrop as we grabbed different beer pours. The selection of beers was quite a sea of change from the usual local craft beers we tend to find at similar beer events. We launched immediately into Kona Brewing Company’s “Longboard Lager,” which we’ve tasted several times before and remembered as a drinkable, light beer. But the company’s “Curious Traveler” was the true revelation, full of tasty hops and golden in color- similar to the “Longboard” but a bit more complex in aroma and taste.

International brews were also thoroughly represented as Thailand’s “Chang Beer,” Italy’s “Birra Moretti,” Colombia’s “Aguila,” and Prague’s infinitely drinkable “Staropramen” were all frequented stops along our journey around the increasingly packed space. The New York beer scene was similarly on hand with reps from Blue Point Brewing Company (“White IPA,” “Hoptical Illusion”) and Southampton Publick House (“Double White,” “Burton IPA”) chatting casually with guests. As the celebration of all things beer on these two floors commenced, a trapeze show began right overhead giving onlookers some conversation pieces as a limber woman maneuvered herself above the drinking stations. In an adjacent lounge room, a burlesque show also would welcome dancers to the stage repeatedly throughout the day, another nice timeless touch to an already classy event.

While beer and food events have become more commonplace in and around New York City, the unique theme of “East Ville Des Folies” certainly put a fun and distinctive spin on an afternoon of drinking. Our only regret was not donning our own 1920’s style flapper wear. But if this year’s event was any indication, there’s always next year. And if you’re in the know like we are- you’ll grab your tickets nice and early to an event that is truly exceptional.