The Second Annual Slow Food Show Comes to Jimmy’s No. 43 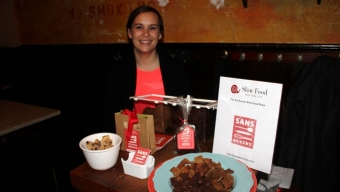 For the second year in a row, the Slow Food Show descended upon East Village haunt Jimmy’s No. 43 for a full afternoon of delicious local eats across a spectrum of different edible businesses. Bringing together an array of different local food entrepreneurs inside the confines of one of the neighborhood’s most eclectic and cozy establishments, the ingredients and methods of preparation revolve around locally sourced materials, focusing on a commitment to food that’s been dubbed ‘good, clean, and fair.’ Sunday afternoon the four hour showcase transformed the small but lively bar/restaurant into a diverse food fair, giving attendees a tremendous value at just $10 a ticket.

The bar itself was open and pouring suds all afternoon long. Despite not being looped in with the Slow Food event, few would argue that the pours of Allagash Black didn’t pair exceptionally with some of the small samples being handed out by small business proprietors. We began by stopping by our friends at Saucy By Nature who were doling out different delectable spreads and sauces, of which we went wild for. Their “Cilantro Lime” varietal was especially outstanding, which would taste excellent on items ranging from pastas to hamburgers. Speaking of multi-uses, A&B American Style Condiment’s ‘Pepper Sauce’ provided the kick of an excellent hot sauce without the overpowering, tongue blistering spice to prevent you from tasting the rest of your meal. It proved to be perhaps our favorite of the condiments, although truthfully everyone in the running was worthy of praise.

For our initial foray into the world of Ethiopian cuisine, Taste of Ethiopia was also on hand. The winners of 2012’s NYC Fancy Food Show Contest brought with them four distinctive African staples like collard greens and spicy red lentils, serving the only hot fare of the afternoon. The smells and tastes were indescribable as we lapped up the conglomerate of flavors with each swoop of our makeshift spoons. We also enjoyed the samples handed out by the folks at Kings County Jerky Co., who are rapidly expanding in stores throughout Manhattan. Their sesame seed laden ‘Korean BBQ Jerky” was as flavorful as any we’ve had in recent memory, which we noted several times in our repeat visits to their table.

Among the other mentionables from the Slow Food event, Greenpoint Brooklyn’s The Splendid Spoon’s two delectable soups, jojo’s sriracha’s ‘spicy chili’ sauce, ‘nonna’s sweet sauce’, and the medium spiced garlic ‘Tickle Sauce’ all would be welcome additions to our expansive pantry. While the savory was great, sweeter items like Razzy Gabby’s five tasty jams, Granola Lab’s endless selection of the dried delicacy, and Sans Bakery’s awesome brownie bites and gingerbread cookies all capped a day of start to finish food tastes across a bevy of different scales. Getting the word out on these local businesses was the idea of the day at Slow Food’s Second Annual Event, but the real winners were those of us lucky enough to meet each proprietor and taste their locally produced offerings.