Kimchi Night: Meet the Author at Jimmy’s No. 43 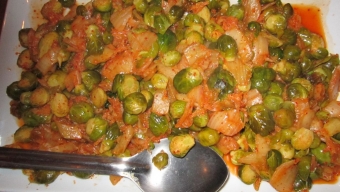 The cookbook has long been a passing down of traditions and recipes that transcend cultures and time periods. The Korean delicacy Kimchi is no exception to this rule. Despite having seemingly been around forever, this pickled morsel has witnessed a renaissance in recent years, becoming a staple appearing on menus citywide. Kimchi has evolved beyond being merely a side dish since it straddles the line as a spicy sandwich topper, salad or simply as a meal on it’s own. Author Lauryn Chun knows this well and is eager to share her Kimchi knowledge and love with the world. And on Wednesday night the LocalBozo.com crew headed to East Village favorite Jimmy’s No. 43 to meet the author of “The Kimchi Cookbook: 60 Traditional and Modern Ways to Make and Eat Kimchi” for a deliciously informative event.

As a huge fan of Kimchi in all it’s forms, I was like a kid in well, a Kimchi store on Wednesday night. Ms. Chun and her team chose to celebrate the cookbook launch and signing in a very hands on fashion. Not only was the book on hand for all to peruse though, but heaping selections of Kimchi inspired dishes were doled out for sampling as well. And I can guarantee most of you have never thought some of these ingredients could work so well together.  Shortly after the night kicked off, large serving trays began to enter the Jimmy’s No. 43 event space. First off was a Kimchi loaded grilled cheese sandwich and as a fan of the comfort food, grilled cheese is always at the top of my must try list. Adding medium spiced Kimchi into the fold deivered a different animal altogether. The initial bite provided a highly satisfying crunch, which was instantly satisfying and the spicy, perfectly seasoned cabbage paired brilliantly with the tasty melted sharp cheese and toasted bread. The takeaway from the event of course was that the easy to prepare dishes encouraged guests of the event and to recreate this exact dish in our kitchens of any size just by following Lauryn’s cookbook.

Looking for more vegetable based, healthy fare? The second over-sized silver tray presented a stunning mixture of the featured Kimchi, but this time paired with vibrant Brussels sprouts. In recent years, the once maligned sprout has exploded onto the culinary scene as a popular side dish paired with the likes of bacon and other hearty meats. Besides having a stellar flavor on its own, the sprouts also retain the flavor of foods they are prepared with. Here, the tangy sensation of the kimchi infused perfectly with the delightfully bitter sprouts. Not only was this dish a winner with my palette, but also was aesthetically beautiful to look at. Staying aboard the “Veggie Train,” the next dish was worthy to accompany any meat based dish- especially hamburgers. An innovative version of “Slaw” hit the table featuring kale, red cabbage and of course the pickled guest of honor. Each bite married each respective ingredient together in a pleasurable burst of sour flavor. Listen up football fans, because this slaw is a perfect Superbowl side for those wings.

Make no mistake, Lauryn Chun has an eye for taking produce and using it to it’s potential. If you are a lover of Kimchi or have simply tried it once and thought it was interesting, this book is for you. Nothing is more satisfying then creating something from scratch which is downright scrumptious so do yourself a favor and pick up a copy of “The Kimchi Cookbook: 60 Traditional and Modern Ways to Make and Eat Kimchi” either for your own home or as a truly original holiday gift. As the winter begins to chill us to the bone, why not spend some quality time indoors transforming cabbage, radishes and so much more into delectable dishes with the ones we love?