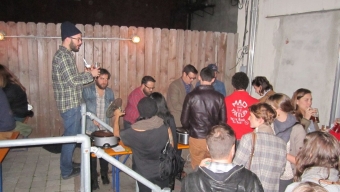 Blog: Occupy Sandy Chili Cook Off at The Diamond

Since Hurricane Sandy all but crippled New York City’s five boroughs, outstanding relief efforts from everyday citizens have worked tirelessly to bring our majestic city back to it’s feet. Seeing this first hand has been both beautiful and downright humbling. From digging out the decimated Staten Island to serving hot meals to Brighton Beach residents from popular food trucks, people are seriously helping their fellow man and woman. Benefits and fundraisers have also popped up around town in a major way, allowing bars and music venues a chance to raise funds to donate for relief efforts. On Sunday night popular Greenpoint bar, “The Diamond” presented an extremely fun and tasty way to raise these necessary monies. This delicious relief effort came in the form of a Chili Cook Off where eight home cooks were able to do battle against each cause in an immensely enjoyable, yet spicy way. The LocalBozo crew took the G train to sample all the hearty chili’s!

The $12 ticket fee for chili tasting was completely donated to the, “Occupy Sandy Relief” effort. This donation fed not only the hearts of the packed house, but everyone’s stomach in a major way! Tickets allowed guests to sample eight chili’s (vote on their favorite) and receive one pint of the very rare “Hofstetten Hochzeitsbier” beer, served from a wooden barrel. Bands would also be rocking the basement as well, making this a stacked Sunday night in Brooklyn. Before kicking off my personal chili tasting flight, I grabbed my pint of the rare barrel served brew. The, “Hofstetten” had the character of a delicious fall style ale, making it perfect for the mid-November evening.

Once our bellies were primed with fantastic brews, it was official chili tasting time. And even though the chili stations were labeled, 1-8 we felt like bouncing around between the crock pots instead of tasting them in order. Our first stop was at table 2, featuring a team led by Will Stark and his fellow Texas brethren. The chili was called, “Uncle Creech’s Last Words” named after Stark’s uncle who gave him, the recipe before passing away. And for the first chili tasting of the evening, it was also the most complex. Will informed me that they overloaded the chili with choice meats from the renowned, “Ottomanelli & Sons Meat Market” of the West Village. If that wasn’t cool enough these guys challenged taste buds with ingredients such as: red plumbs, chocolate, and Black Session I.P.A. If that wasn’t enough they also used a ton of spices that both provided solid heat and a ton of flavor. Directly next to this Texan treat sat Dave of The Diamond bar’s chili (Table 1). Not only was Dave running the event, pouring the rare beer, but he was also doling out terrific samples of his well refined chili. This chili could easily be described as the hearty comfort food variety you would want to eat on a snowy day! Dave garnished each sample with sharp cheese and a round crouton.

After a much deserved beer break it was time to move on to more sampling! The gentleman who manned table 6 provided one of the spiciest chili’s of the evening. I guess I should have put this together from his somewhat serious demeanor that something was afoot. Upon tasting, I received a jolt of heat yielding instant hiccups. The cook off contestant informed me he overloaded the dish with Mexican red chilies, which explains the spice explosion. Beyond the heat was a truckload of hearty meat flavor. Some notable mentions would have to be, “Table 4′s” chicken based chili garnished with a heaping amount of cilantro and, “Table 5′s” use of duck!

When the final crock pot was rendered empty it was time to count the votes. Dave from The Diamond took to the front of the bar to announce the chili from, “Table 2″ had won head and shoulders above the rest.  Their Texas roots paired with a keen eye for flavor made their win make total sense. But in the end the true winner was the, “Occupy Sandy Relief” effort. At the time of the cook off winner announcement it was stated that event had brought in over a thousand dollars and counting. These types of fundraisers are exactly what makes our city such a special, and closely knit place. On a Sunday night we came together in a cool way while giving back to those who seriously need it most.