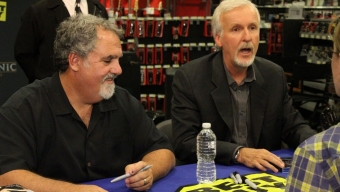 Despite the initial theatrical release which premiered some fifteen years ago, there’s just something uniquely special about 1997’s Titanic. Whether it’s the ahead of its time filmmaking or the lightning in a bottle performance of two iconic actors of American cinema in their breakout roles, it is a film that has transcended genres, cultures, and language barriers to the tune of an estimated $2.2 billion worldwide. And still, a decade and a half later, the film is as beloved and as celebrated as ever. Monday evening, the Best Buy retail store in Union Square hosted a release party of sorts for the new Titanic and Titanic 3-D Blu-Ray sets, headlined by an interactive Q&A period and autograph signing by Director James Cameron and Producer Jon Landau.

Fans arrived for the two hour session long before its 7pm start time. The roped off second floor area of Best Buy was heavily attended by New York Film Academy students, excited and anxious, hoping to pry some nuggets of wisdom from Hollywood’s most successful pair of moviemakers. Cameron and Landau emerged from the back of the store to a warm applause, pausing for a brief photo opportunity together before taking their seats on stage next to moderator Bryan Norton. The pair candidly recalled their roller coaster ride in creating the film from its initially tepid reaction during screenings to the pinnacles of its success.

What was incredibly interesting for the formerly highest grossing film of all time (surpassed by Cameron’s Avatar), the film opened with a $28 million weekend, but subsequently followed with $29 million and then $32 million box office weekends- a relatively unheard of occurrence, increasing week after week. Further, the highest grossing single day of the film was day 60, which also just happened to be on Valentine’s Day 1998, based solely on the word of mouth buzz of the movie. Cameron also revealed that despite being sought for the film, actor Leonardo DiCaprio refused to read for the part of ‘Jack Dawson,’ and the director, notorious for his hour long auditions to appropriately cast his films, was ready to move on. But fate intervened, DiCaprio was cast, and Cameron’s masterpiece was created.

The hour long discussion also featured interaction with the sizable audience on hand, which led to several gems from the director’s mouth:

While Landau chimed in here and there, much of the dialogue belonged to Cameron, who discussed the possibility of Avatar 4 emerging as a prequel to films 1-3, the subsequent sequels 2 & 3 both sound like a certainty to be created. But the evening revolved around Titanic, with the in-store televisions displaying the crisp, clean lifelike picture of the remastered film surrounding the celebrity speakers. Meanwhile, likeminded fans graciously and patiently hung on Cameron and Landau’s every word with too many questions from the audience to be fielded during the brief session. But everyone who purchased the discs was treated to a concise meet and greet and signing with two visionaries of modern cinema that are ten steps ahead in intuitively sensing where filmmaking is going next. And just being around James Cameron and Jon Landau and listening to their collective love for creating art was as inspiring as it was interesting for this jam packed New York City crowd.