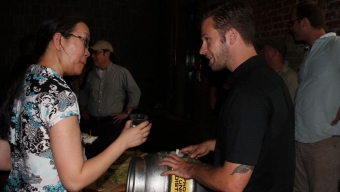 The Good Beer Seal’s “July Good Beer Month” continues on in 2012, with more exciting events day after day. Throughout this steamy month, exciting ale centric programs will be held at each of the 40 Good Beer Seal bars throughout the city. The LocalBozo crew has been out celebrating these events, while learning a great deal about our favorite adult beverage. On Monday night we headed back to Williamsburg’s “Brooklyn Brewery,” a venue that has become our regular stomping ground for “Hopfest: Backyard Hops In Support Of BK Farmyards.” The large brewing room was literally transformed into a “House of Hops,” allowing event goers the opportunity to walk around to taste the brews and smell the miracle flower produced by “backyard” hop growers throughout New York.

“Hopfest’s” easy going flow and no line build ups allowed patrons the chance to try everything offered several times over. It also yielded plenty of opportunities to chat with the brewers and growers themselves. Our first stop was at “Simply Beer,” a homebrew organization created by Peter Kennedy, whose passion lies in creating enjoyable ales while showing others how rewarding the process is. “Simply Beer” came with a wide selection of beers for the event, but we settled on two particular ones to match the summer weather. Our first sampling was their “Wit” style. The nose presented several pleasant spices, none of which I could easily recognize, but its taste provided that bitter yet light fruit flavor I just can’t get enough of. Next up, was the “Pale Ale.” This particular cup of suds had a nose that matched the taste seamlessly. It was strong, and expertly produced. I basically chewed each hops-loaded sip.

After that highly rewarding first tasting it was time to make our way to the food offerings, which were extremely beer-friendly in nature. East Village brew haven Jimmy’s No. 43 came with two types of savory linked meats. First off, we grabbed a thick sausage topped with a delightful peach relish. These were great for return visits to pop in one’s mouth between hoppy ale samples. Since one good turn deserves another, we grabbed a traditional hot dog topped with a spicy Vietnamese slaw. The heat paired nicely with the salty, high quality hot dog. Williamsburg local, egg, came with biscuits, but not your grandma’s style at all! One of the biscuit selections was loaded with a bacon jam. This inventive, down home dish was sweet and buttery. And yes, it was “Bacony” as well! I could have eaten the entire basket, but then I wouldn’t have been able to fit on the G train. Add in pretzels from Sigmund’s, and you really had a smorgasbord of hearty fare for all tastes.

With bellies primed with good eats we headed back to the sampling tables. This table in particular was impossible to miss, as it was covered with examples of different types of brilliant hops. The colorful bounty was brought to us by “Peekskill Brewery.” The upstate New York brew pub brought in a large crew to explain each hop used in the production of some of their favorite brews. Luckily, event goers could do more than just smell and touch hops. The “Peekskill” guys brought with them a cask of “Cream Ale,” which was light in color, utilizing Palisade Hops. I don’t like to play favorites but this beer was highly drinkable during this massive heatwave. The hop used here produced notes of citrus paired with a satisfying earthy finish. I would certainly make the trip up there for several of these session-style ales, but the hop love didn’t stop there!  Friends of LocalBozo.com at “Bronx Brewery” continue to grow in popularity serving up their flagship, “Pale Ale” to the delight of many in attendance. It also wouldn’t hurt to mention they are now the owners of a pretty sweet delivery van adorning their Bronx logo, since they self distribute. Congrats fellas!  “Bierkraft” owner, Ben Granger drew big crowds as well, with his selection of homebrew and hops providing lively lectures and demonstrations. You can see how much this guy cares about the art of taking hops to the next level.

On Monday night, “Hops” most certainly had their day in the sun. Meeting these brewers and tasting their wears is an experience any true lover of craft beer needs to make a point to do. Even though the evening was about celebrating, giving back has to be part of the game. And giving back they did. All of the proceeds from this killer event went to benefit the hardworking folks at “BK Farmyards,” a Brooklyn based decentralized farming business providing local food distribution to reduce our reliance on fossil fuels and provide green jobs. Using beer to go green? We’ll drink to that.