The 2012 Cook Out NYC at Governors Island 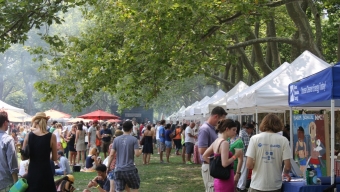 On a Saturday that was marked as the hottest day of the summer, The LocalBozo crew boarded a ferry bound for Governors Island. There beyond the sea, waited a full day of great comfort foods and cold beer, along with tons of fun and a wild eating contest. Yes, we boarded the ferry for the 2012 Cook Out NYC, which in retrospect was the best way to beat the harsh heat, and appreciate the fantastic eats and drinks painstakingly produced around town.

The Cook Out took place on a heavily tree lined field located deep in the heart of the Island. Upon entry, the smells of grilled meats and sauces crept up our noses much like the burger loving Wimpy from the Popeye cartoons- they were just that enthralling. And after quickly getting our bearings we hit the first table which belonged to our new friends at the West Village’s Lucky 777 Chili Company. This relatively new business is setting the standard for what chili should be. The Lucky team came to Governors Island with a full on party attitude, with Mardi Gras beads in tow! Their chili of the day was a turkey variety, which sat atop a hot dog. The perfectly slow-cooked chili provided us with a savory way to start off a full day of eating and imbibing.

With a great food base set, it was time to get our beer fix. Cook Out NYC’s beer was provided courtesy of Brooklyn’s “Sixpoint Brewery” who unleashed some thirst quenching seasonal brews onto the crowd. We first grabbed a tall can of “Apollo,” a Bavarian Wheat style ale that hit all of the notes of a proper easy drinking summer beer. The cold can was the perfect partner for a blistering hot day. The other side of that coin was the “BZZZ,” a relatively complex saison featuring a brilliant cloudy appearance, paired with a honey-meets-fresh-baked-bread taste. Both brews more than satisfied while carrying us into our full on eating fiesta.

With brews in hand, it was time to taste some burgers and our first stop was the popular STK House of the Meatpacking District. Their “slider” was a mini burger, loaded with oozing cheese, killer sauce, and great pickles. The tiny package sat upon a delightfully fluffy homemade bun. Without skipping a beat, we then shot right over to Long Island City’s Alobar tent. There, we experienced a burger that broke down almost every convention of the typical “meat on bread” standard we have come to know. Alobar’s “Ground Wild Boar Burger with Fresh Vegetable Salsa” is as adventurous and delicious as its ingredient description. As a huge fan of all things pork, we could not get enough of its tender flavor while the veggie salsa only added to the overall enjoyability of this thing.

The great people at Jimmy’s No. 43 came out swinging with their usual display of fun flavors. Even though it was an intense day of heat, we couldn’t get enough of their gourmet “Grilled Cheese Sandwich,” stuffed with a variety of Cabot brand cheeses. They were fantastic to pop in one’s mouth between sips of brew. After sampling all over these highly savory foods it was time to introduce some fire into our bellies! Much of “Cook Out NYC’s” layout was loaded with mad scientists of the spicy eats variety and the boys at Cajun Ken & the Penthouse Boys set the tone for heat with their barbeque chicken doused in their “XXX” and “Slap My Cajun Ass Creole” hot sauces. Each sauce packed a serious punch of peppers (habanero included) to challenge one’s tolerance for heat. The main food server had a carnival barker attitude to perfectly match the insane nature of his saucy wears.

In keeping with our mission of trying everything spicy, we made our way over to the “High River Sauces” table, which comes from the mind of longtime heavy metal-er’s who have a life long passion for heat infused sauces mixed with outstanding flavors. Our crew sampled each sauce starting from the good on anything “Top Fuel Verde Sauce” all the way to the no joke but deliciously spicy, “Hellacious Hot Sauce!” It should be no surprise that we left that day with a bottle of their sauce to use at home. They are simply that good. And after previewing the preparation of their kimchi in person last week, the folks at the Lower East Side’s “Mama O’s Kimchi” came to the island with a truck load of the spicy cabbage delicacy for a kimchi eating contest. Several eventgoers would brave the heat to see how many jars they could put down in three insane minutes! It was quite enjoyable and downright hilarious to see both men and women of all walks of life sticking it out. But in the end, it was Graham “G-Man,” who blew away the competition by pounding 2 1/3 jars of the Mama O’s Kimchi.

If you were at Governors Island this weekend, our recap surely provided you with memories of a highly enjoyable weekend, even though the weather was quite unforgiving. Maybe you imbibed too much and our write-up is catching you up on what you missed during your black-out. And yes, some of you sadly couldn’t attend for one reason or another. Wherever you spent your weekend, Cook Out NYC was an incredible two day event that all fans of food, brews, and fun days in the sun need to experience. Be sure to stay tuned all year long to find out when this outstanding festival is making its mark on the island where the Hudson meets the East River next year.