Yelp Brooklyn Kicks Off the Season with ‘Summerfest’ in Red Hook 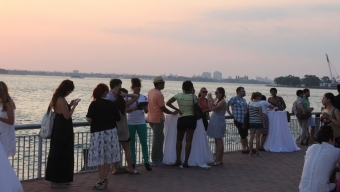 Since its inception, Yelp has given a voice to the aspiring food critic in each of us- for better or for worse for some restaurants. In the spirit of giving back to the passionate authors and readers that made their brand a nationally recognized household name, Thursday night Yelp Brooklyn would host a free event at the sprawling indoor and outdoor space at Red Hook’s historic Liberty Warehouse. Dubbed ‘Summerfest,’ the evening would celebrate the kickoff of 2012’s warm season. And although the trek out to Red Hook is no easy task for Manhattanites, the food tastings and striking waterfront views certainly made the trip a worthwhile endeavor.

It seemed as if the folks at Yelp Brooklyn learned a thing or two from the perils that doomed Day one of The Great Googa Mooga earlier this year- when the free event was massively oversold to the detriment of most attendees. Instead, ‘Summerfest’ was expertly run- from the vast amount of open space indoors and out, to ample seating options for patrons, to relatively nonexistent wait times for food and beverage inside the Warehouse’s main area. The two tiered space proved pivotal for guests with plenty of room against the barricades to take in the breathtaking sunset views over Manhattan. Marveling at the location was one thing, but the bevy of free fare being served up was what brought us out via the South Street Seaport’s ferry.

We began immediately outside the building where two food trucks were stationed and where the lengthiest lines began forming. The Red Hook Lobster Pound was handing out “Lobster BLT Bites” pairing fresh chunks of lobster with crispy bacon atop a buttery toast while Korilla BBQ was serving generously sized “BBQ Pork Tacos,” topped with their house made, creamy and fiery sauce. Both tastes were among the best that Summerfest had to offer. Korilla’s sopping wet juices seeped from underneath the soft taco onto our serving plate, mixing tastes of sweet with spicy around the drowned salted meat. The Lobster Pound’s offering was excellent, but it was diminutive compared to the other participating restaurants. Other notable bites came from Benchmark Restaurant’s “Pork Parfait,” which paired braised pork shoulder with creamy mashed potatoes and glazed in a miso caramel, DuMont’s “White Gazpacho,” a chilled soup prepared with hints of cucumber, grape, toasted almond, olive oil, and yogurt, and The Saint Austere’s “Spicy Sausage Polenta,” which (self explanatory as it is) tasted even better than it sounds. Our favorite sampling of Yelp Brooklyn’s ‘Summerfest’ came from Williamsburg’s Mable’s Smokehouse. Their representatives were slicing and serving unbelievably tender slices of “Pit Smoked Brisket” doused with their in house blend of barbecue sauce. The warm smoked mouth-watering meat chunks were outstanding and paired perfectly with the gulps of accompanying Heartland Brewery beers that we held in both hands.

With live music and interactive games outside the Warehouse and along the waterfront and a multitude of food and drink inside, the after work types that managed to RSVP in time to attend Yelp Brooklyn’s ‘Summerfest’ certainly had their share of things to do on Thursday night. Admittedly, our trips out to Red Hook in the past typically involved overbuying unnecessary home goods from Ikea and struggling to find our way home. But while our hands may have been empty on the subway ride back to New York City on this night, our stomachs were surely full. And in chatting with some of the Yelp Elite members and other likeminded patrons imbibing and chomping as the night wore on, we all seemed to agree that this Yelp party was the perfect kickoff to summer in our city.