The Inaugural 5 Boro PicNYC Kicks Off Summer on Governors Island 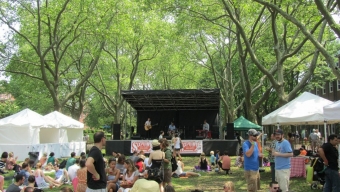 The ferry out to Governor’s Island was full on Saturday as Manhattanites flocked out, not only for the heavily anticipated two day “5 Boro PicNYC,” but also with bicycles and picnic baskets in hand, to enjoy the first glimpse of summery sun amid the holiday weekend. Spirits were high on the Island this weekend, as attendees could have their fill of great beer and ‘cue- two seasonal staples- and the fact that everyone was sharing tables made it really feel like a backyard picnic. Produced by Food Karma Projects, the event was another of many run seamlessly by the outfit, with a plethora of different vendors signed up for the first notable outdoor event to hit Manhattan this year.

With much fare to speak of, the ‘PicNYC’ also made live music available for attendees. The bands provided a nice background to the event, performing as each patron filled their hands with all the grub available to grab. Bands like John Schmitt, Alec Gross, and Tomcat & the Whiskey Rats, provided the soundtrack for the afternoon festival. Although the temperatures weren’t necessarily scorching, the Island’s shady areas were welcomed as a respite from the sun. Additionally, while the event was well attended, the grounds did not seem overcrowded. None of the lines were unmanageable and most of the vendors managed to continue serving well past 3pm.

Though much of the appeal for the “5 Boro PicNYC” relies on the warm weather, the food and drink are the drawing card. And highlights, there were a-plenty. We began on what appeared to be the sausage side of the ‘PicNYC,’ as three stations adjacent to each other were serving up the salty cured meat. Vandag’s was grilling a “Blood Sausage” and a “Veal Sausage with Onions,” next to Peels’ “House Smoked Green Garlic and Poblano Chile Pork Kielbasa” paired with delicious pickled cabbage and house mustards, which was thick and full of flavor. And finally, third came Alobar, a clear standout at the event, serving both a “Bison Sausage” and a “Lamb Sausage.” Passing up the “Blood” on such a hot afternoon, the ‘Bison’ was our favorite at the picnic. It was tender and full of flavor and the peppercorn relish gave it a nice kick of heat. The “Lamb” was firmer and the sausage itself was spicier, but was balanced nicely by the cucumber yogurt sauce.

East Village haunt Jimmy’s No 43 was cooking an array of different foods from meats to sides and as per usual, their samplings were particularly delicious. Creamy picnic sides like their homemade potato salad and coleslaw were equally tasty. Prepared with mostly red cabbage and carrots, rather than traditionally loaded with mayonnaise, the coleslaw proved to be a great palette cleanser from all the meat at the picnic. Next up was the “Pork Bahn Mi,” deliciously served with daikon carrots spicy cucumber and mint. This was also a highlight of the picnic and was a nice change of pace from the large amount of sausage we’d just eaten. Additionally each serving was a half sandwich and felt more like a mini meal than the sampling of meat at all the other stations. The cucumber and mint as well as the bread from the sandwich helped offset all the spiced meats served at the other stations. Also worth mentioning were the “BBQ Chicken Drumsticks,” a throwback dish with a traditional BBQ sauce, and tender chicken, which made us nostalgic for the barbecues of our youth. The “Flank Steak” with a green chimichurri sauce on a crostini, was also outstanding. The steak was incredibly lean and succulent and the tangy sauce brought out the meat’s most exquisite flavors. We finally bid Jimmy’s adieu after noshing on the “East Village Kielbasa,” paired with natural sauerkraut and grain mustard. With a piece of bread serving as the bun, the sausage was plump and perfectly cooked, with the sauerkraut and grain mustard adding tons of flavor.

With such a collection of hearty meats being smoked and grilled, washing the tastes down was a must and the Sixpoint Brewery stands became essential stops during our walking routes. Pouring cups of their ‘Crisp Lager,’ ‘Sweet Action,’ and ‘Redo,’ the sudsy beer purveyors had several stations located around the picnic. Although the beer was included with the VIP ticket, it was unfortunately pay as you go otherwise. But ticket prices were absolutely affordable and paying for a few pours was no detriment on this beautiful afternoon.

Other praiseworthy stands included a tremendous lineup of spicy sauces, with even the mildest serving up a bit of fire. Heartbreakind Dawns, NYC Hot Sauce, and High River Sauces were all on hand letting people taste their spiciest sauces, while at the center of the ‘PicNYC’ sat a giant tent hosted by Jarlsberg, dishing out distinctive food tastes using their cheese. Slow Foods NYC was also in the house, plating three different kinds of tacos. And feeling incredibly full but hearing great things, we finally stopped at Lucky 777 Chile who was serving three kinds of chili- the best of which was the “Turkey” variety, which was mild and more traditional prepared, soaked with dozens of beans and spices.

While the inaugural “5 Boro PicNYC” had to come to its conclusion, it’s just the beginning for a multitude of outdoor events this summer. Traditional and familiar fare, great weather, and an open, outdoor setting made this holiday weekend as memorable as any in recent years, with the “5 Boro PicNYC” being the highlight for any New Yorkers looking for a getaway without getting away. Absolutely nothing says Memorial Day weekend like some tasty ‘cue and beer. But for those of us from elsewhere, now residing in New York City, the “5 Boro PicNYC” managed to give us that small taste of home.