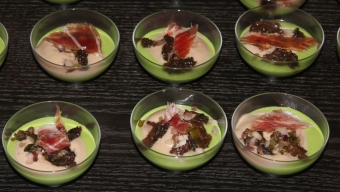 Most of the time, ‘pairing’ refers to simply matching appropriate food and drink tastes together. And while this has become one of our favorite pastimes here in New York City, marrying the ideal venue to host said pairings is a much more difficult task to pull off. With impatient patrons forming lengthy lines, there is a relative dearth for ample space in our crowded Metropolis. Fortunately, Thursday night’s event titled, “Grand Gourmet: The Flavor of Midtown” at Grand Central Terminal’s Vanderbilt Hall was magnificently arranged, bringing together some of the area’s finest purveyors in an unparalleled and sprawling space, to shine a light upon the exceptional local cuisine.

If you’ve spent any time waiting for a train, you don’t need us to tell you about the breathtaking structure that is Grand Central Terminal. From its iconic clock that glares down upon the massive waiting area to the new market, restaurants, and shopping hub all within steps, the building is a living piece of history smack dab in the middle of our fine city. But to be able to venture into the building with the sole purpose of spending some time within proved to be an enriching experience. Vanderbilt Hall is routinely transformed for different events month after month, but few have been able to maximize the space as elaborately as the event on this night. Inside, the venue was packed with after-work types, strolling the space in business attire, sipping fine wines and cocktails which were centrally located near the entrance of the festivities. There was a certain palpable energy in the building, which these events often capture- an anticipation of tasting delights. And the 2012 Grand Gourmet would certainly not disappoint in that regard.

After taking several minutes to survey the surroundings, we made our way over to Park Slope staple, ‘Beer Table Pantry’ for a pour of their, ‘Strumke’- a drinkable light and summery IPA, with a beautiful tan glow. As regular beer drinkers, and the only one on hand at the Grand Gourmet, it was an easy pair to many of the evenings featured edibles. As conservative as our attempts not to fill up within the first hour, the rat race to get a taste of every sample managed to consume us. Some were better than others and some were outright standout dishes. New York Central at the Grand Hyatt located right next door served up an innovative and attractive ‘Spring Pea Mousse,’ a beautifully plated green dish embedded with braised morels, pickled ramps, jampon iberico, and some wonderful foie gras.’ The brilliant collaboration of the savory pureed vegetables with the rich, creamy liver was a tasting experience few chefs can offer. Being that this was a celebration, repeat tastings were not only accepted but they were actually encouraged. Other standouts included Nios’ delectable ‘Duck Confit Taquitos,’ eloquently prepared over an avocado mousse and a lime crème fraiche, The Long Room’s inventive ‘Mini Bratwurst Burger,’ paired with Mother’s Milk mustard, red cabbage, and a dollop of sweet and sour sauce, and Aretsky’s Patroon’s ‘Dark Beer Braised Beef Brisket” laid upon a creamy buttermilk biscuit and topped with some horseradish.

Honorable mention certainly goes to Grand Central Oyster Bar’s excellent oysters from their raw bar- 1 east coast and 1 west coast oyster per serving was perhaps the most generous portion of the entire event, and were succulent and sweet when doused with cocktail sauce and devoured and steakhouses, ‘Benjamin Steakhouse at The Dylan Hotel’ with their tender ‘Dry Aged Porterhouse Bites’ atop a creamless creamed spinach and Bobby Van’s ‘Sliced Filet Mignon’ served over toast points. Although the steaks paled in comparison to each restaurant’s in-house experience, each was served pink and proved to be outstanding additions to the Grand Gourmet event.

Well organized and flawlessly run, the Grand Gourmet avoided many of the pitfalls that malign so many food events of this caliber. Even though hundreds of guest filled the Vanderbilt Hall space, lines were kept short and wait times for food samples were non-existent. The restaurants were perfectly prepared to handle the volume of guests and none seemed to run out of food, even as the event approached its conclusion. Jumping on a small cup of refreshing coffee courtesy of Joe and a mini cupcake courtesy of the fine folks at Magnolia Bakery, we finished up at the Grand Gourmet, completely satiated and satisfied, wondering how the Grand Central Partnership will manage to top themselves in 2013.