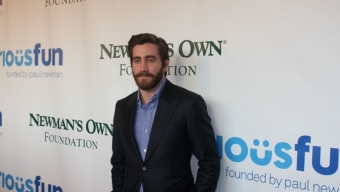 Last week, LocalBozo.com brought you a preview of what would be Monday nightâ€™s wildly successful Lincoln Center hosted extravaganza, creatively titled â€œA Celebration of Paul Newmanâ€™s Dream.â€ The esteemed Avery Fisher Hall would be the host setting for an evening set to benefit newly titled â€œSeriousFun Childrenâ€™s Network,â€ formerly the â€œAssociation of Hole in the Wall Camps,â€ effective today. The incredible program seeks to create a global cooperation of geographic camps specifically for children afflicted by serious illnesses and give them an opportunity to let kids be kids. Monday nightâ€™s gala in New York City was all about getting the word out and celebrating the incredible successes the Network has enjoyed, by growing substantially since its inception in 1988.

As accomplished as he was as an actor, Paul Newman was also a visionary as a philanthropist, teaming with wife Joanne Woodward to launch a virtuous campaign to create these camps, free of charge to children and parents. Today some two decades later, the Network has provided care and outreach to almost 400,000 in over 50 countries around the world. And the red carpet was full of A-listers set to lend their time and talents to a jam packed Lincoln Center on this night.

Perhaps more special than the whoâ€™s who in attendance were the actual campers on hand, sharing their camp experiences, performing different songs for the crowd, and explaining just how much Paul Newmanâ€™s foresight actually meant to them. Set in front of a massive white carnival-like tent, with an orchestral backing behind them, some 14 different campers- of differing ages and illnesses- spent much of the near 2 hour performance, out front and center, comfortably and confidently accompanying the star-studded lineup in song and sketch. Their presence became a revelation, putting actual faces to the charitable cause, which clearly resonated with a reflective crowd.

The incomparable program was an expertly run show, seamlessly interweaving the talented children in and out of the celebrity guest monologues and song performances. Actor Jake Gyllenhaal fondly recalled how influential Paul Newmanâ€™s on screen work was on his own acting career, while late host Jimmy Fallon extolled the network of camps and their incredible success today. 30 Rockâ€™s Tina Fey read an actual letter written by the parent of a camper, speaking of the immeasurable relief the camp was able to bring to their family, giving them just a short respite from having to care for the child so intricately. Country star Trisha Yearwood joined the likes of singers Josh Groban, Elvis Costello, and the incomparable Paul Simon for some alternating poignant and rocking live musical performances, both with and without the help of the campers. 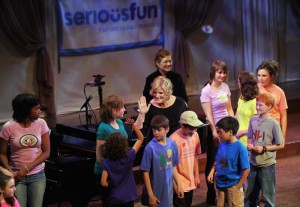 The evening would come to a close as NaTasha Yvette Williams, star of Broadwayâ€™s â€œThe Gershwin’s Porgy and Bessâ€ would be joined onstage by the campers once again for an inspired rendition of Katy Perryâ€™s â€œFirework,â€ which broad the entire seated audience to their feet, dancing along with the beaming set of children onstage. While organizations can spend much of these events enticing attendees for donations, seriousfun instead made the evening a celebration rather than an all out pitch- pairing some of the most talented celebrities on the planet with a group of children much stronger than most of us, for an evening that was seriously fun. For more information on Paul Newmanâ€™s seriousfun Childrenâ€™s Network or to make a donation, check out seriousfunnetwork.org.