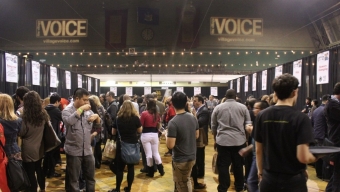 The 69th Regiment Armory was designed at the turn of the twentieth century to house the Fighting Sixty-Ninth, New York City’s military unit. Yet for the past five years this historic and ornate building has been the home to one of the city’s largest events celebrating delicious food, fine spirits, and social media. Tuesday night, the Armory once again played host to the Village Voice’s 5th Annual “Choice Eats.” And if they had Twitter and facebook back in 1905, I have a feeling we would have been celebrating its millennial anniversary, because it’s just that damn fun. The LocalBozo crew was there to bring you everything from the first pour to the last bite!

Upon entering the armory, a map laying out the locations of the food and beverage purveyors was firmly in our hands. ‘Choice Eats’ is such a massive event, one needs to keep a running check list of what they’ve tried, and especially what they still need to hit. Before we could even think about sampling something savory we needed to wet our whistle. Luckily, directly upon arriving, at the front of the room stood Stella Artois. The bartender poured perfect pints into the specially crafted Stella glasses and just like the popular commercials he used a knife to remove the excess head from each pour. The taste of fresh Stella is something for all beer lovers, and newbies to experience- a relatively light beer, but with a ton of character, making it an optimal brew to pair with salty meats.

With some beer already down the hatch, it was time to sample some of the best food that Manhattan has to offer. And speaking of salty, savory meats the first table we hit served up one of the most inventive dishes of the night- Goat Town, one of the East Village’s most talked about eateries. And in keeping with their name they were plating a ‘Goat face sandwich.’ Having never eaten goat in my life, it was both distinctive and mysterious, with a cavalcade of different flavors making me an instant fan. It also helped that the server donned a Luchador mask when handing it to me. I guess I was really enjoying the sandwich because as soon as I turned around, the venue was jamming up with fellow ‘Choice Eaters,’ giving me incentive to keep moving down the line.

‘Choice Eats’ is really all about trying new things as so many of our favorite restaurants and local food makers can be innovative with their dishes. Sweets purveyor ‘Dirt Candy’ took this to heart, spinning a cotton candy with a chipotle seasoning. Each bite delivered that sugary flavor you remember from your youth, mixed with the Spanish chile we have come to embrace. It was a brilliant mix and tasted even better our second time around. The next off the beaten path sample came from ‘Brooklyn Brine Co.’ The popular pickle maker kept it both local and unique with their sour pickle brined in a Hudson Valley Whiskey cask. Aged in Rye, with each bite the smile on my face showed off my love of pickles, especially when bathed in one of my favorite spirits.

The crowd was in a word, lively. Everyone seemed to revel in the fact that this was a party to celebrate the things that make New York City living that much more enjoyable. Certainly there were some lines especially when you feature über popular restaurants like The Meatball Shop and Luke’s Lobster. But everyone seemed patient and at ease, and eventually the clogs dissipated and everyone was able to taste. Folks just used the time to drink their ales and make new friends. When not seeking out food, eventgoers could be seen rocking out to the DJ stylings of Andy Rourke formerly of legendary British band, ‘The Smiths.’ Rourke’s mix of head bobbing classics and new tracks kept the crowd partying and singing along during the raucous food tasting frenzy.

‘Choice Eats’ provides its patrons with exposure to foods they may have never tried previously and restaurants who rule the roost and even those just starting out have a platform to provide eager foodies with their wares and broaden their names to a crowd full of New York City taste-makers, always on the lookout for that special something. After the final pint was poured, people checked their watches. They weren’t looking at bus or train departure times, but for how long they had to wait until next year’s Village Voice ‘Choice Eats.’