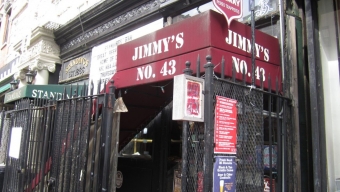 Jimmy Carbone and the entire Jimmy’s No. 43 team seem never to take a break when it comes to bringing fun and innovative food events to the public. And seriously, thank goodness for all their hard work as these spirited events take place all over town, sporting a distinctly different theme each go around. This past Sunday brought the festivities back to the Jimmy’s No. 43 home base in the East Village. Yes, the underground home to all things craft beer was the home to the “Second Annual Duck-Off,” a competition celebrating that tasty fine feathered friend.

The entire back room of Jimmy’s No. 43 was dedicated to this cook-off, perfectly pairing it with the nearby bar, serving up a serious variety of craft beers. The second anniversary of this event featured both professional and home cooks alike, all with the goal of producing the day’s most unique duck creation. Five adventurous culinary teams made up this roster, featuring a true cross-section of style and New York neighborhoods.

The tasting lines for all five stations moved quickly, allowing guests to have a first round of samples, and then a second helping if they desired to do so. Our first helping of duck came from home cook and blogger Susan who runs the site, The Girl in the Little Red Kitchen. Susan’s dish was, “Deviled Duck Bacon” which was a deviled egg with fois gras topped with a hearty cut of cured duck bacon. Before we even tasted it we could tell this was a special dish, with lots of potential. And after the first bite we knew our hypothesis was right on the money. The convergence of flavor was outstanding. The mixture of smoky duck bacon and decadent fois gras will make any food lover smile, and ask for more.

And speaking of decadent dishes, the next one took us from appetizers right to dessert. Frequent cook-off competitor Adrian Ashby came to the ‘Duck-Off’ with a highly unorthodox dish, mixing sweet and savory like never before. Ashby created a chocolate doughnut covered by savory and salty duck pate. With each bite there were tastes of equal parts sweet and salty as if you were eating the items on their own. It was food chemistry to the max by a mad scientist in the kitchen.

Other notable dishes included a duck filled dumpling covered in a tangy slaw and a ravioli with duck and lavender. Starting to drool yet? Each of these dishes were fantastic and our only complaint was not getting enough of them. Sadly, other people had to try them and after the last piece of duck had been popped in our collective mouths, the voting took place. Our favorite dish, the”Deviled Duck Bacon” took the top prize sending Susan of The Girl in the Little Red Kitchen home with the appreciation of the crowd, and fellow cooks. It may have been an afternoon for sampling decadent treats, but in the end proceeds would go to benefit the Food Systems Network NYC, a not-for-profit organization dedicated to ensuring the health and well-being of New Yorkers through access to good, wholesome, nutritious, and safe food and to supporting a strong, sustainable, regional farm and food economy. And isn’t that savory and sweet?