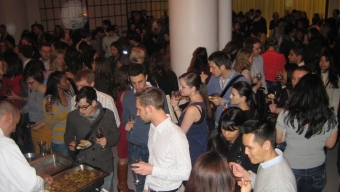 Beginning today, Manhattan’s “Stinky Cheese Festival” officially begins, as part of New York City’s Tour de France. Some of the city’s finest French restaurants are tailoring their lunch and dinner menus around the use of ‘fromage,’ through February 17th. Thursday night, the Stinky Cheese Festival kicked off in style at an all you can consume party hosted at 404 Tenth Avenue, the upcoming site of aPORKalypse Now. The colossal, three floor space was perfectly suited for an event of this caliber, as lovers of finer things like French wine and cheeses deserve a classier setting for their food pairings. And the venue and event delivered, big time.

Although the event was sold out, the hospitable crew did an excellent job of ushering in guests from the cold and quickly through the coat check line. By the time we had arrived, the main floor of the 404 was crowded but manageable. A quick glance around at the clientele revealed professionals in their 20’s and 30’s dropping by the event after a long work day, looking to kick back and unwind with some friends. It should also be mentioned that single men are clearly missing the boat with fantastic tasting events like these- the female to male ratio on Thursday had to be at least 4 to 1.

After choosing our trail, we quickly grabbed a glass and headed for the booze- craft beer brewers’ Ommegang Brewery was on hand pouring their “Abbey Ale,” a tasty red amber, with floral aromas and a spice induced finish, and just a few short feet away from there, Goose Island was serving up their “Sofie,” a lighter, more tart, summery style Belgian ale, with a relatively dry finish Both paired excellently with the selections of food around us. Surprisingly, the event was not simply a collection of cheese purveyors laying out tables of their creamy provisions. On the contrary, many of the restaurants participating in the week-long festival had gathered at the kick-off event, equipped with unique tasting dishes utilizing different stinky cheeses, and in between some traffic, and some short waits on lines, we managed to taste them all.

Selecting a favorite cheese or dish at events like this is almost impossible. In fact, more often than not, you find yourself running around gorging to avoid any unnecessary waiting and just in case any of the vendors run out of food. But the Stinky Cheese Festival kick-off was considerably more casual, and as such, the entire crowd just seemed relaxed. The Upper West Side’s Nice Matin prepared a delectable ‘stinky cheese tortelloni,’ a sizable Italian dumpling covered in butter and truffle oil, which was doused in sauce but deliciously sour. Morningside Heights’ Le Monde’s served a fantastic ‘fondue,’ meshing together a creamy Emmental cheese with smoky bacon, making a perfect collaboration for dipping some freshly cooked bread croutons on a stick. Other tasting essentials included Café D’Alsace’s (Upper East Side) ‘goat cheese tart,’ topped with crispy, caramelized onion straws, Maison’s (Midtown West) ‘chicken wellington,’ served as a puff pastry over a layer or cheese, Marseille’s (Hells Kitchen) fall off the bone ‘short ribs in a burgundy wine sauce, and Barbounia (Gramercy), whose ‘stinky kenaffe’ paired roasted phyllo dough with ricotta, mozzarella, sweet rosewater syrup, and a fig chutney topper for a marriage of savory and sweet. We’d also be remiss if we failed to point out Pigalle’s (Hells Kitchen) insanely inventive blue cheese ice cream, sweet and creamy with a savory cheese finish. While it sounds unconventional, it worked well nonetheless.

Once satiated, we grabbed a glass of Hermann J. Weimer’s incredible Gewurztraminer, produced upstate at New York’s Finger Lakes wine region, and headed upstairs to the third floor lounge for some casual seating, some friendly conversation, and to reflect upon the evening that was. After a long week of work, with the weather slowly deteriorating, the Stinky Cheese Festival was exactly what we needed to be extricated from the stresses of our everyday hustle. And just as we caught ourselves beginning to complain about the problems we’ve been having at the office, a stranger leaned over and asked “do you want some cheese with that whine?” Yes, please! For more information on the Stinky Cheese Festival, you can check out Tour de France NYC.