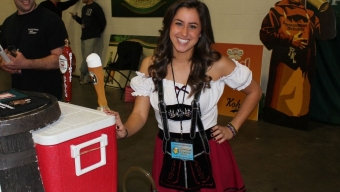 It was a united nation of brews on Saturday, across the pond at the Meadowlands Exposition Center at Harmon Meadow. It takes a special event to bring the LocalBozo crew to the Garden State to cover an event, but the 17 minute journey from Manhattan was a stones throw away and featured an unparalleled variety of different international beers. We’re talking about the International Great Beer Expo, the second annual festival celebrating all things malt, hops, and barley with breweries from around the world showing off their country’s respective suds. Having covered several beer and spirit festivals in New York City, it was time to see what New Jersey was working with.

When you hold an event of any kind outside of Manhattan you are most likely guaranteed one thing- space. The Meadowlands Exposition Center is a gigantic convention hall that allows thousands to be in attendance, without there being a crowd crush. Entering the expo floor was a breeze, as each worker knew their job and expedited guest check-ins. Plastic tasting glasses were handed out with a strict 2 oz. pour line on them, because in reality, people could get wildly out of control if there weren’t at least some rules in place. After grabbing our glasses and event programs, our crew walked the expo floor. And due to the large space, we were easily able to grab beer samples without waiting on long lines. In fact, although some of the more popular vendors, like Innis and Gunn had waits, they lasted just a few short minutes.

Everyone around us seemed to be in very high spirits. One reason was that the event was being held steps away from Metlife Stadium, home of the now Super Bowl champion New York Giants. Many attendees entered the space wearing their Big Blue jerseys, while others arrived in groups donning matching shirts, and wearing necklaces made of pretzels. These pretzel wearers were some of the smartest in the bunch as pretzels and bread of any kind are known for soaking up alcohol, and slowing down the “drunk process.” And with an event that would last several hours, that was imperative.

With so many beer options available it was near impossible to choose a favorite. Our crew felt is was important to sample beers that were rare or in limited production. San Francisco’s Anchor Steam brewery was pouring a very seasonal Christmas ale, a favorite of ours amongst all other winter brews. The chocolate, meets nutmeg flavor is other levels good. And in keeping with heavy and dark beers, we sampled an 11% Barleywine that yielded a flavor unlike anything you will try when it comes to a typical beer.Â  Besides these rarities, all of our favorites were in attendance. Be it Ithaca, Stoudts, or Long Trail, our glasses remained full throughout the event. But in the end we are not snobs, so we welcomed repeated pours from the guys at the Pabst Blue Ribbon table.

Around 23 different countries were represented at the Expo, from Poland’s ‘Tyskie’ to Austria’s ‘Stiegl,’ with a bevy of different domestics in between. From Flying Fish to Victory, High Point to Long Trail, Allagash to Boaks, we sipped on old staples to ones we’d never heard of. While food options were diminutive, samples of tasty JB’s peanuts, Benito’s hot sauces, and wing sauces from Bonfatto’s proved essential to our early session journey. And it seemed just as soon as we had gotten a good buzz on, it was time to get back on a bus and head back to the big city- equipped with the knowledge of a plethora of new beers that we’re now fans of.