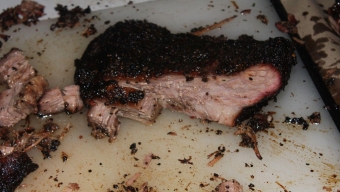 Blog: The Brisket King of NYC

After the success of 2011’s “A Brisket-A Brasket” event at East Village haunt Jimmy’s No. 43, it was reasonable to expect an upswing in attendance, and accordingly, a move from the small albeit cozy space to a larger one, capable of accommodating a much larger crowd. As such, Monday night’s event was re-tooled as “The Brisket King of NYC” and relocated to the more spacious Santos Party House in Chinatown for an evening of tender meats, artisanal spirits, and crowning a champion. And a portion of this year’s proceeds would once again be donated to benefit the New Amsterdam Market.

A growing line found relief promptly at 6:30pm as the entrance to Santos Party House officially opened. While most headed straight for the bar to set the table for the three and a half hour long event, we let our noses lead us around. Interestingly enough, each chef prepared something distinctive so that the flavors from each purveyor did not seemingly run together and each brisket could stand on its own merits. With the main floor area filling up quickly and seating space quickly becoming a premium, we sought out a place to plant ourselves in between runs to each sampling station.

The served dishes ranged from the traditionally smoked variety, equipped with perfectly burnt ends, to the more inventive. Chef Emma Feigenbaum’s innovative ‘Bristrami Meatball’ utilized brisket and pastrami, ground up and spiced before being doused in panko crumbs and deep fried. Topped with a drop of mustard, the salty, crispy ball was unlike anything being served and became our first repeat stop in the room. Small and tender, the ball was delicious. Similarly imaginative was chef Robbie Richter, whose ‘Brisket Shabu Shabu’ packed a wallop of spice into a small soup dish, with a chunk of cured brisket, poached in a tomato horseradish consume; the bottom of which was laden with exceedingly spicy slices of jalapeno. People’s Choice winner Andrew Gottlieb won the hearts of the crowd over with a small tortilla chip as a base for his red Mole soaked brisket, hand prepared with pickled onions, an avocado crema, and a lime squeeze. Finished in just two bites, the meat was tender and delicious with a Mexican inspired flare.

While there really wasn’t a bad dish in the bunch, we clearly preferred our favorites. East Village sandwich shop Joe Dough, served up a tasty six foot sandwich- ‘The Almighty Brisket’- slow roasted with black pepper, garlic and sugar and topped with pickled onions and a creamy peppercorn mayo. The sandwich was served cold, but was outstanding, delivered on an excellent and unrivaled hard sesame seed bread. Midtown East’s The KitchenNYC also deserves some praise for their Worcester braised brisket served in a bowl atop a bread buttered with horseradish. Chef Patrick Connolly delivered an ideal collaboration of savory and sweet, with the shredded brisket pairing wonderfully with the sopping white bread below. Our favorite dish of the evening however belonged to Chef Will Horowitz of Duck’s Eatery and his traditionally prepared ‘Bubby’s Oak Smoked Brisket and Papaya.’ With a small side of homemade slaw as the best side of the event, the perfectly cooked meat was glazed in a homemade apricot preserve before spending 15 hours smoking in oak and apricot wood. Served Texas style with a black peppercorn spice, the meat was smoky and pungent and the texture of the brisket fell apart with seemingly each touch of the tongue. The combination of flavors, hot temperature, and overall taste and tenderness of the meat, made Horowitz’s dish decisively a no brainer.

Not mentioning the remaining participants would do them a disservice, particularly because each eater’s pallet is so vastly different. We’d therefore be remiss to ignore John Brown Smokehouses’ foie gras topped burnt end brisket and a black truffle jus, Murray’s Cheese’s red wine braised brisket smothered in their melted, creamy fontina cheese, Mr. Bobo’s traveling band of BBQ outlaws and their silver dollar brioche bun entrenched around their chopped brisket or Thomas Joseph Catering’s red wine and grape juice glazed brisket, seared and slow-cooked over a warm polenta crisp. Even Jimmy’s No. 43 themselves got in on the action, preparing a beer braised brisket with a chimichurri sauce in a tortilla wrap, which tasted surprisingly more Asian infused than anything else.

As we approached the third hour and finding space became more and more difficult, we began packing up, awaiting the announcement of the evening’s Judges to select their favorite dish. The pungent smell and inspired cooking of John Brown Smokehouse was simply too much for the panel to ignore as the outfit was named the Brisket King of NYC. On this night, the crowns may have been limited to the winners, but all attendees managed to eat and drink like Kings and Queens.

Jimmy’s No. 43 and Food Karma Projects offer tremendous value at food tasting events just like this one all year long. Stay abreast of everything coming up by bookmarking this link and keep reading LocalBozo.com for more of New York City’s finest eats!