Bookbinding for Beginners Workshop with Nathaniel Kressen At Word Brooklyn 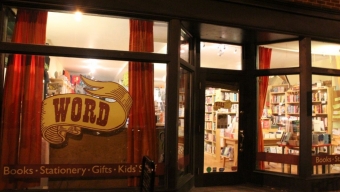 In the post-industrial neighborhood that is Greenpoint, Brooklyn there are a variety of thriving businesses offering their wares to a hungry public. Few offer as many hands on activities and popular events as Word, Greenpoint’s independent bookstore. Tuesday night, we made our way over to Franklin Street to check out one of Word’s über hands on events. It was the ‘Bookbinding for Beginners Workshop’ led by local author Nathaniel Kressen.

The bookbinding event was an exercise of do it yourself ingenuity under the instruction of a writer who has made a career of keeping his work local. Nathaniel Kressen is a Brooklyn-based playwright, screenwriter, and novelist. Kressen’s debut novel, Concrete Fever was released this past November and his New York centric novel has been selling throughout the borough ever since. In keeping with the giving nature of this event, each attendee of the bookbinding event received a copy of the hand-bound, illustrated first edition of ‘Concrete Fever’ as part of their registration. It appears that the DIY culture is thriving, because this event was sold out leaving the Word staff tasked with turning people away, promising potential future sessions around summertime.

Kressen began the session by reinforcing the eventual reward that he finds in making something with your own hands. He informed the guests that all of the materials they would be working with in the class were available locally at one of many Brooklyn based craft and supply shops. He went on in detail about some of the more common mistakes made initially and even revealed the fact that you might draw a little bit of blood while binding. But in the end, mistakes are inevitable and give the book character. Kressen continued, stressing that one should not be afraid to change one’s approach to the process because the process should always be changing innovatively. After digesting Kressen’s instruction the class jumped right into the process under his guidance, while at the same time, lending some assistance to each other using the methods they had learned just minutes before.

Word Brooklyn is a revelation in a crowded big box bookstore type atmosphere in which we currently reside. The store is warm and friendly with a crack staff of knowledgeable book lovers on hand to point you in the direction of a book you are searching for or make a solid recommendation. Besides books, they sell locally made shirts and crafts, and throughout the year the store offers various hands-on events, as well as writers making in store appearances. So if you are a fan of the current wave of DIY culture or just looking to pick up a new book to read on the train, you have to check out all the goings on at Word.