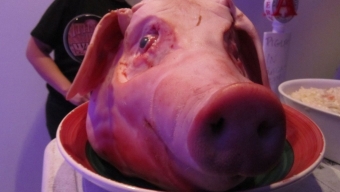 Whoever said that too much of a good thing is bad for you, obviously wasn’t at 404 NYC on Saturday night. The Gods of gluttony were out in force as the innovative event producers of Get Real NY brought the masses “aPORKalypse.” It was a be all end all celebration of all things pig and craft beer, spanning three floors at a killer venue. And after a very short wait outside, the hordes of hungry and happy New Yorkers entered the venue, forced to pick up their jaws from the floor as visions of meat and ale danced before their very eyes.

Upon entry, guests were handed a glass which could hold just the right amount of beer for a solid taste, and then were set loose on a seemingly endless variety of porky delights. Often times people like to survey the entire space before they even have a sip or bite. We feel that’s a huge time waster, especially at something as popular and sold out as this. In fact, we urge you to blindly eat and drink whatever is handed to you first. It sets a nice tone for exploring all of the outstanding fare at your finger tips. Our first dish was a savory and hearty pork sausage paired with broccoli rabe from the restaurant Amali with Fossil Farms. The saltiness of the sausage and the broccoli worked very well together, while making us quite thirsty. Not a problem, a few steps down the line planted a dark chocolatey stout in our glasses.

Cured meats are not only delicious but they are a labor of love for whomever prepares them. Most of the time, events of this size feature thin slices of prosciutto. And while that is a tasty treat, I crave a cured ham with an extremely high fat to meat ratio. Luckily my dream became a reality as this cured beauty was a sight for sore eyes. I noticed right away that the fat ratio was staggering. Chatting with the purveyors, we uncovered that the cured leg was a close relative of ‘lardo,’ a charcuterie made by curing strips of fatback. Each thick cut slice contained a flavor profile so satisfying, that it has almost spoiled our love of everyday cured meats. Beers were quickly in order and the good people at Gramercy’s Taproom were there to help. They were pouring one of the more complex ales of the event, a Saison with a sour yet fruity finish. We picked up fresh orange zest with every sip.

404 NYC continues to impress us as one of the city’s premiere event venues. The sprawling three floor space can easily be morphed into whatever the day’s event calls for and the white walls and surfaces allow the event planner to utilize it as a canvas. During previous festivals, the Get Real NY crew have transformed event spaces so well that many people people hoped what they were attending was a permanent fixture. “aPORKalypse,” was no different as we could spot several groups, and even ours wanting to hang past the end of the event.

At an event as grand as “aPORKalypse,” we couldn’t possibly list everything we tried- although it needs to be said, we loved each of the multiple hog samples and beer pours. Some of the highlights for us included Kips Bay’s Waterfront Ale House with their bare bones whole hog on plate. Each plate yielded different tastes as some were all meat, while others had the perfectly smoked fatty skin. Relative newcomers Bronx Brewery and Alewife of Long Island City proved they too can hold their own with some of the city’s veterans, all while representing boroughs that haven’t gotten enough love until now. I truly wish everyday could be the “aPORKalypse.” I doubt my doctor would agree.