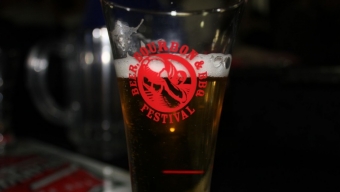 It’s hard to believe that just a few short years ago, barbeque in New York City consisted of a few less than stellar chains. Sure we were known for our pizza and deli’s, but smoked meats not so much. Thankfully in recent years, eateries such as Dinosaur BBQ, Hill Country, and Wildwood BBQ, as well as Mable’s Smokehouse, Fette Sau, and Georgia’s Eastside BBQ have popped up around town, finally bringing some credible ‘Que to New York City. But like most New Yorkers we cannot remain complacent with the places we can enjoy at any given time. We simply crave variety. Enter the Beer, Bourbon, and BBQ Festival, the annual touring celebration of all things meat and spirits.

Everything we do around the island is grandiose. So when an event of this caliber comes to town, a massive space is necessary to accommodate attendees to manage the flow of traffic and keep wait times short. Accordingly, the Beer, Bourbon and BBQ Festival was broken into two parts, to best serve the masses and our taste. The first session, dubbed the “Bacon Bash,” featured 10+ tasting stations servng up gourmet bacon from all over the country and local restaurants. We opted to head to the second event which was all about the, “Whole Hog.” With the price of admission, all patrons would receive a souvenir tasting glass, unlimited samplings of beer and bourbon, and three tapas pork samples from either three different ‘Que joints, or one large plate from one of them, equipped with all the fixins.

It was just around five o’clock on a mild Saturday afternoon with the start time for the “Whole Hog” portion of the festival still about thirty minutes away. A hulking line of hungry pork fans wrapped around the restored factory warehouse known as La. Venue. But no one seemed to care about the line because they mere steps away from a pork filled paradise. After picking up a schedule and our complimentary tasting glass we entered into the sprawling festival space. The main room was huge and well spaced out. It was also the home to much of the food vending, live bluegrass music, brew, and bourbon stands. As we made our way through for a first lap around, we watched our fellow meat eaters in awe of the whole hog, slow cooked to perfection, just waiting to be pulled and plated. Yet before grabbing a plate of porky goodness we had to sample some of the adult beverages available.

Over sixty craft brewers and more than forty distillers truly represented an array of different tasting options at the festival. Guests were able to walk the main room and side space which was reminiscent of a classic flea market, receiving hearty samples of booze while speaking with its maker. The beer selection was so diverse and at times, we didn’t know what to try next. If the line was short, we jumped to the front- who were we to discriminate? Each brew representative had a pitcher ready to go with the sudsy stuff, just ready to pour. Towards the entrance we spotted New York newcomer, Bronx Brewery drawing a large crowd showing the masses that the Bronx knows a thing or two about beer. With every step we took our glass remained full. Be it Goose Island of Chicago with an IPA or Allagash of New England with a chocolatey Porter, we tasted the country and damn it goes down smooth. Our favorite overall was Narragansett lager. Amongst a sea of beer options, the cold brown pour eneveloped everything we look for in a beer- a tremendous bouquet of different flavors, a strong (but not too strong) alcohol content, and enough of a refreshing, carbonated finish that the brew can sit on its own or be used to wash down some tasty bar food. The Bourbon selection was similarly diverse. Big brands like Makers Mark and Bookers were spliced between the beer vendors throughout, making for easy access to whichever spirit struck you. Since we were in the mood for something sweet, we tried sipped on Cabin Fever’s ‘maple whiskey.’ Served atop a huge piece of ice, each taste went down with the finish of a hearty breakfast- overly sweet, but delicious nonetheless. Maple is infused in many pork dishes, making this pairing a fine compliment. Once we had a good buzz on, we surveyed the lengthy food lines- Blacksauce was the lengthiest, but we’d already eaten at Hill Country before. Instead, we jumped on the line for Lil’ Red Pig, who had an entire hollowed out hog laid out in front of their stand. Ordering a plate of food from them consisted of their purveyor literally putting his hand inside the pig and pulling out chunks of freshly roasted meat and plopping it on the plate. The packed dish of freshly pulled pork, savory beans, and creamy cole slaw more than hit the spot.

The 2012 Beer, Bourbon, & BBQ Festival brings an insanely fun atmosphere to the normally bleak winter months in Manhattan. Many of these tasting events are held outdoors and are normally reserved for warmer weather, but in a nice change of pace, this one takes place indoors, in a massive, suitable space, with some of the most energetic and friendly booze and barbeque enthusiasts that you’ll find anywhere. Even with both sessions completely sold out, lines were not a detriment, and there were plenty of alternate options if you were patient enough to seek them out. On the way out at the end of the session, there was another whole hog, with heaping samples being handed out free to taste. With grease on our face and pork in our stomach, we stumbled out of the event in agreement- we’ll definitely be back next year.