The Brooklyn Comics and Graphics Festival 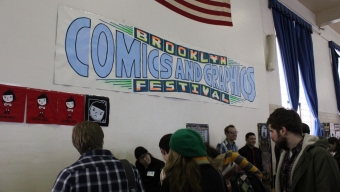 The annual Brooklyn Comics and Graphics Festival returned to Williamsburg this weekend to satisfy the hunger of the hardcore comic fans of New York City. The popular fest is organized by the dynamic team of Desert Island, PictureBox, and Bill Kartalopolous and it consists of three parts: artists and publishers displaying and selling publications, a gallery of original art, and lectures and conversations on comics. LocalBozo hopped aboard the G train to find out what all the buzz was about.

This celebration of all things comics and graphic work took place at a church which was completely transformed into a convention hall setting. Every inch of the two floor facility was packed with artists and vendors selling their mostly independently produced work. Throughout the day, guests to the free event could see their favorite artists and writers at lectures over at popular Williamsburg bar, Union Pool. These proved to be immensely popular, leaving standing room only.

As a fan of mainstream comic titles like Robert Kirkman’s, “The Walking Dead” and the much beloved “Watchmen” series, I had inadvertently closed myself off to the broader world of “funny books.” We really had no idea about the massive amount of independently produced comics and graphic novels that exist even with in our own city. And after only an hour of checking out tables packed with every type of genre you can imagine, we now have a lot of reading to do this week.

One of the tables that caught our eye right away was the team from Killer Acid, a Brooklyn based company formed by Rob Corradetti, a print-maker and musician. Corradetti’s work features otherworldly characters, presented in a highly original and unapologetic manner. The work titled, “Pizza Party” features overly greasy slices of pizza that appear to be alive. Eyeballs, gaping mouths, and feet can be spotted as you observe this highly detailed piece. It also makes a killer t-shirt, which you can purchase on his site. Corradetti is also known for hand made screen printings of satanic monsters, perverted aliens, and rock and roll burn-outs to name a few.

Unlike many larger conventions and festivals, Brooklyn Comics and Graphics allows fans access to the producers of the medium they love. Much of the books and merchandise were very reasonably priced, giving fans the chance to grab up loads of reading material, and hand made screen prints. Yet beyond all the swag that one could purchase, New York City brought to light another niche in the hobby market that saw men, woman, and children of all ages mingling together over a common interest.