Everybody Loves Our Town: An Oral History of Grunge By Mark Yarm In Conversation At PowerHouse Arena 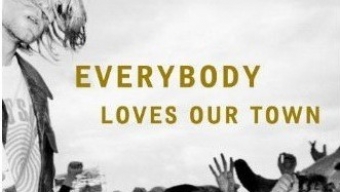 Blog: Everybody Loves Our Town: An Oral History of Grunge

Mark Yarm, former Blender magazine senior editor and all around die-hard music fan, has written a book that may very well define one of the most storied times in music history. “Everybody Loves Our Town: An Oral History of Grunge” tells the whole story of the founding and early successes of Seattle’s Sub Pop record label, the rise of lesser-known bands as well as the powerhouses- like Nirvana and Pearl Jam, the insane media hype surrounding the grunge explosion, and the suicide of Kurt Cobain. And on a fittingly rainy night in Brooklyn, Mr. Yarm would sit in conversation about his work, to an eager grunge-nostalgic crowd.

DUMBO’s The powerHouse Arena - a laboratory for creative thought, played host to the author’s speaking event. The sprawling 5,000 square foot gallery, boutique, book store, performance, and events space blew me away as soon as I entered. Living in Brooklyn, I feel almost ashamed that this was my first time there. As a cool touch, grunge music (primarily Nirvana) blared over the speakers as guests took their seats.

Yarm was smartly paired with fellow journalist, Rob Sheffield to speak to the packed powerHouse crowd. Sheffield, a columnist for Rolling Stone, and author of “Talking to Girls About Duran Duran” is no stranger to music and pop-culture. The conversation flowed easily between the two men as they discussed everything from lesser known bands of the era to grunge inspired films. The latter provided the crowd with some geeky belly laughs.

We applaud Mark Yarm’s dedication to get the full story on the grunge movement. By conducting more than 250 unique interviews, his readers will be able to digest a well rounded account of one of the most talked about music movements of the past century. Yarm explained that gathering these interviews was not an easy task as he had to be both vigilant and persistent with e-mails and phone calls.

Yarm and Sheffield’s conversation not only got me excited to read the book cover to cover, but it also allowed me to take a trip down my own grunge memory lane. Luckily they opened the floor up to questions and comments about this cultural era. One audience member was even so bold as to speak about how grunge music saved her life, while others asked Yarm about the interviewing process for the book and about other behind the scenes stories.

“Everybody Loves Our Town: An Oral History of Grunge” by Mark Yarm is published by Crown Archetype and is now available at book outlets everywhere. So roll out of bed, don’t shower, throw on your flannel, and head out and buy this book. Oh, and don’t forget to pretend to not care. It’s the cool thing to do.