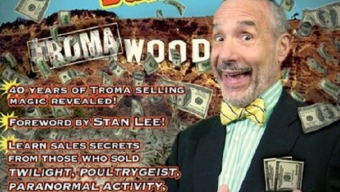 Lloyd Kaufman might be the last true filmmaker working today. For the past thirty years, Kaufman’s Troma Entertainment has amassed a cult following of fans while influencing some of the brightest names in horror filmmaking. Kaufman continues to be one of the last true voices of independent cinema and with the release of his new book, “Sell Your Own Damn Movie,” he is able to teach budding filmmakers the do’s and don’ts of getting their films out to the public.

Last night, Kaufman descended on NYC’s famed Strand Book Store to a packed house of Troma fans, independent filmmakers, and wide-eyed onlookers. With the helpÂ of members of the Troma team, Kaufman proceeded to teach the audience how to effectively “sell our own damn movie.” As a long time Troma fan, this was anÂ exceptionalÂ opportunityÂ to learn about all of Kaufman’s successes and obstacles through the course of his legendary career.

Throughout the hour long event, Kaufman pulled no punches as he discussed a myriad of topics, often times making it clear that theÂ world of film has turned greatly against the indie filmmaker. Due to large conglomerates and faux independent film companies, individuals seeking to get into the business will have to work that much harder to make a name for themselves. But alas, all hope is not lost.

Kaufman also provided some spot-on tips for newer filmmakers trying to get their first feature sold or more importantly, seen by an audience.Â Movie and comic book conventions rank high on Kaufman’s list of places where first time filmmakers should go, to be seen as these events are filled with hundredsÂ of people all looking for the next great genre film. Suggestions like the San Diego Comic Con and Dragon Con were noted as virtual gold mines for self promotion. But Kaufman made clear that it is up to the filmmakerÂ to have the know how and the balls to promote themselves. By way of example, he explained that when he was promoting Poultrygeist: Night of the Chicken Dead (a brilliant, gore-filled flick that is a must see for horror fans) he bombarded conventions with fliers and preview discs. This strategy worked and paid dividendsÂ for Troma.

The LocalBozo crew was granted a few minutes to speak with Lloyd Kaufman before last night’s Strand Event. It must be said that the man was both bold and outspoken in person, and man was this refreshing. During our chat, Kaufman provided us with some sobering insight into the ever changing New York City landscape and the media industry as a whole. He also gave us a preview of two highly anticipated releases from Troma called “Father’s Day,” and “Mr. Bricks: A Heavy Metal Murder Musical!” We will be among the first to inform you about both of these films upon there release. If you are a fan of film or a traditionalist who appreciates the preservation of independent business, the work of Lloyd Kaufman and the entire Troma team commands your respect. Each day they are striving for ‘Reel’ film independence for us all.

Check out our Audio Interview:

Audio clip: Adobe Flash Player (version 9 or above) is required to play this audio clip. Download the latest version here. You also need to have JavaScript enabled in your browser.