Jimmy No. 43′s Brisket Cookoff for the New Amsterdam Market 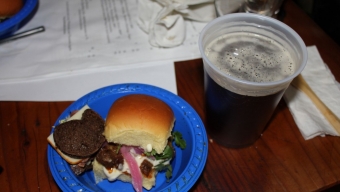 The chills of late March outside could not prevent the fiery competition inside as 10 different vendors assembled under the same roof to crown the champion of the Brisket Cookoff. East village haunt Jimmy’s No. 43 wore the dual hats of host and philanthropist, as proceeds were graciously used to benefit the New Amsterdam Market. Each of the purveyors were as friendly as they were inventive, with each brisket tasting completely different from the previous. And although there was a panel of judges on hand to call the action right down the middle, let LocalBozo.com fill you in with our own play by play.

Inside the bar on this afternoon were people of all ages, from gray haired men to babies in strollers. But where their ages may have differed, their love of tender brisket was the same. The setup inside was used capably to maximize what was relatively limited space, but the event was not oversold, keeping traffic flowing and waits for food manageable. Upon arrival, patrons were handed both a scorecard for notetaking and plastic blue bowls for sampling. The drinks were not included unfortunately, but with $6 pints of Sly Fox, we gladly washed down the bites of tender meat with gulps of the refreshing ale.

But like most of our food tasting events, we were consumed with thoughts of tasty brisket, and the good folks inside did not dissappoint. We had Williamsburg staple Fatty ‘Cue handing out some incredible brisket sandwiches- topped with a fresh cilantro, pickled and raw onions, and a creamy white cheddar cheese, on a fresh, soft mini-bun. The brisket itself had a hearty, smokey flavor, with a hint of garlic in between the buns, and the sandwich was simply the best overall sample we tasted at the event. If the Fatty ‘Cue sandwich was number 1, Mr. Bobo’s shredded brisket sandwich was 1a. Topped with their famous Jack Daniels World Champion Barbecue Sauce, the sandwich was as simple as meat and bun, with the distinct flavors of vinegar, Jack Daniels liquor, and the sweet tang of barbecue sauce dancing together in unison. The sandwich was so delicious in fact that we continuously lapped up the remaining bread in whatever remaining sauce we could find.

Uniquely, an entry from the Kingsborough Community College Students brought out the creativity that only students could concoct. We witnessed the brisket cocktail, which actually had chili flakes in the cup and around the rim. Using ample vodka and actual leftover stock, the students were able to marry the contrasting flavors incredibly well. Coupled with a delicious brisket rizzoto, pan fried and topped with sour cream, the young chefs instantly became a competitor in this cookoff challenge. Also worth mentioning was the team at Court Street Grocers who brought in mini corned beef reuben sandwiches- tiny slices of pumpernickel bread, topped with cured meat, muenster cheese, cole slaw, and russian dressing. The sandwiches were one-bite masterpieces and our gluttony could have gotten the best of us, had we not been too embarrassed to ask for fourths.

We’d also be remiss if we failed to mention Orwasher’s bread, the upper east side bakery that was fully stocked and was the base for many of our tasting samples. The bread was fresh and delicious, and was everything a tasty New York bread should be. But after the bread was devoured and the sauce was digested, it was time for the judging, and Jimmy’s brought in some big names to make the event feel truly special: radio personality Arthur Schwartz (The Food Maven), Mitchell Davis (Beard Foundation), and Annie Hauck-Lawson & Jonathan Deutsch (Gastropolis) to name a few. After much deliberation, and after the People’s Choice Awards were compiled, The Kitchen NYC was named the winner. Their brisket was an Asian infused style, topped with pickled watermelon and lime, with a pinch of sea salt, and mixed in a salty au jus broth. The flavor had a bit of a kick, but was completely mouth-watering to say the least. Word on the street is that it was actually cooked in duck fat. Meat, in duck fat!

While we would have chosen an alternate as our flavor of the day, we can’t fault the judges for their decisioning. Overall, the afternoon was a complete success, bringing attention to creative new culinary masters and raising money for the New Amsterdam Market, who are trying to “incubate a new and growing business sector of purveyors who source food directly from farmers and producers whom they trust to be good stewards of our land and waters.” For more information on the Market itself, check out newamsterdammarket.org and check out Jimmysno43.com for Jimmy Carbone’s historic bar!