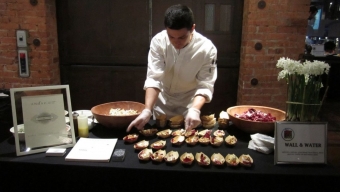 Hundreds of hungry patrons packed The Astor Center on Lafayette Street on Monday night, in the hopes of taking in some of the most delectable tastings from some of Manhattan’s most exciting restaurants. Metromix.com’s “Hot Plates “Live” event featured gathered vendors from 12 of the City’s most respectable restaurants and 5 other liquid vendors to wash the grub down, in a fantastic tasting event. LocalBozo.com was frothing at the mouth for the chance to try some eclectic offerings from some terrific eateries that we regret not visiting sooner. And with tickets at just $15 a pop, the price was certainly right for filling up on new experiences.

The crowd at the Astor Center began lining up well before the suggested 6pm start time, likely drawn by the appealing smells being served inside. Arriving early, we sought to make our rounds before the event got too crowded and admittedly, circled the vendors much too quickly. Apparently, we hadn’t given Metromix.com enough credit. The evening was so well organized and the space was so well utilized that at no point did the crowded room feel overwhelming. Lines at the food stations were virtually non-existent. Even though there was no coat check on this cold wintry evening, there was sufficient bench space to comfortably leave your belongings, while traveling around the two connected rooms. Kudos to the Metromix staff for making what could have been a chaotic evening of vultures brawling their way for food, into an organized, classy tasting event.

Our one beef with the restaurants, more so than the sponsors themselves, was that some of the stations began running out of food well before the event’s conclusion. Perhaps the utter gluttony of the patrons and the limitless trips to each vendor caused the eventual food shortage at some spots, but it seems peculiar that a station would close up over an hour early. It should be said however, that the mostly twenty-something crowd did not seem bothered in the least, parading around the spacious rooms in conversation and in smiles, satiated and satisfied.

Down to the nitty gritty: the food (full list of vendors and offerings below). Aside from the ticket price for the event, the amount of food for the value was unbeatable. Hill Country Chicken’s “mini Texas handrolls” were a standout for us, with a tender, breaded chicken finger wrapped in a small whole wheat tortilla. The Sunburnt Calf’s “lamb sliders,” a favorite from Grub Street’s Hester Street Fair in the fall, was back again, with the same delicious fare- a fresh mini-brioche bun surrounding tasty pulled lamb and creamy yogurt. The financial district’s Wall & Water was on hand with a unique hand held salad wrap- radicchio, endives, blue cheese, dried apricots, walnut salad, and crisp bread, doused in truffle oil- that was pound for pound the tastiest two bite sample at the entire event. The heartiest cuisine by far was the “lamb ragu sliders” served by Anfora. The delicious lamb meat was stuffed inside a thick, bowl-like bread and meshed mouth-wateringly with some pungent pecorino cheese. The sliders were served to be eaten with forks, which proved useful as well for the Brindle Room’s “Frito pie,” which looks and tastes exactly as you would expect, and topped with shredded cheddar cheese- a big hit with our taste buds.

After the main dishes, came the desserts of course. A group called Bisous Ciao Macarons served up an assortment of winter macarons like nothing we’ve ever sampled before- two light crispy pastries surround a sweet center filling- for a perfectly sweetened overload of taste. The salted caramel flavor was a standout for our mouths. Similarly the assortment of Italian doughnuts from Bomboloni felt like a heavy pastry but was delightfully, not overly sweet or as rich as we were dreading- and that’s a good thing, after an hour of eating. The three different, refreshing varieties of Joe’s Coffee on hand and the endless bottles from the folks at Smart Water, proved crucial for washing everything down. Brooklyn Brewery, Moonshine, and El Tesoro Tequila were also on hand, providing booze to quench your thirst as well.

All in all, Metromix.com’s Hot Plates Live was a complete success. Unfortunately, we failed to mention the delicious food served by places like Hecho en Dumbo, Brats: Dogs & Wieners, and Choza Taqueria, amongst others. The young professionals that attended the event seemed to leave pleased and full, knowing that the cab ride home was likely to be more expensive than this three hour evening buffet of tastings.