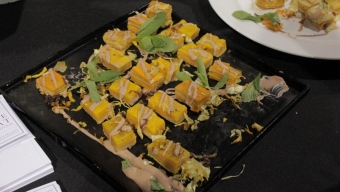 Last night marked the Fourth Annual Village Voice “Choice Eats” event at the 69th Armory on Lexington Avenue.  If you have never attended a “Choice Eats” event, it is perhaps best described as a chaos of gluttony.  With over 90 different vendor participants confirmed, and with an event at a huge venue sold out five weeks in advance, we didn’t know what to anticipate once inside, but we found out quickly one thing we had assumed all along- New Yorkers love their food.

VIP guests were welcomed inside starting at 5:30pm, a full hour before their general admission counterparts.  These guests were also treated to “Choice Streets,” the opportunity to sample from several food trucks on hand outside prior to the event-  Wafels & Dinges, Kimchi Taco, and Joyride to name a few.  Additional staff was on hand to distribute full bottles of imported beers, gift bags, and to check coats, which was imperative with so many patrons wearing oversized jackets inside the Armory.  The VIP hour also featured some of the tables that would be on display upstairs in the main area, like Brooklyn’s SCRATCHbread, Avenue B’s Mercadito, and a perennial LocalBozo favorite, Kuma Inn, who ran out of food even before we got down to the exclusive area.  Admittedly, it was probably a good thing that they did, as there were enough other vendors upstairs to induce a hearty food coma.

As the clock approached the 6:30 start time, lines began forming outside the entrances into the main area of the Armory, as hordes of hungry folks remained waiting outside for their own green light to come inside.  As soon as security gave the go ahead, foodies rushed in like cattle, hoping to pounce on the short lines from the more notable eateries before the long lines began forming.  The $45 ticket price enabled an all you can eat and all you can drink smorgasbord of local restaurants, so people didn’t waste any time getting started.  Capitalizing on our early arrival, we immediately raced over to Sara Jenkins’ Porchetta for their delicious “ragu crostini,” a deliciously thick meat-sauce draped over a crispy toast, and to Black Shack Burger for a similarly tasty “braised beef sloppy joe,” topped with a bread and butter pickle, and served with a side of creamy slaw.

Shortly after starting, we tasted our favorite dish of the event, at a place where a lengthy line would form early and persist throughout the evening.  The vendors at Red Look Lobster Pound out of Brooklyn combined sweet Maine shrimp, doused in a homemade tarragon mayonnaise, seasoned and served in a top split bun, for one of the most fantastic “shrimp rolls” we’ve ever had the pleasure of eating.  Not to be outdone however was Luke’s Lobster, who concocted a “Maine shrimp roll” of their own- a lightly toasted split top bun filled with mayonnaise doused shrimp, drizzled with lemon butter, and a dash of seasoning.  These were absolutely the two seafood highlights of the entire event, if not the two best outright.  However, Del Posto’s marriage of “chocolate and eggplant” was also incredibly in contention- a deep-fried eggplant, doused in a vinegar, topped with creamy vanilla ice cream and a sweet chocolate drizzle was impeccably sweet, and the hot and cold collaboration was a mouth-watering topper to the evening’s longest line.

Our unsung hero of the event (place we hadn’t heard of/dined at) had to be Gottino, which sits on Greenwich Avenue.  Their “pesto di noci” dish was a rich, thick pesto of walnuts, parmesan, sundried Sicilian tomatoes and thyme serves on a fresh Royal Crown Bakery bread.  The pesto was heavy, but it served the dish well for perhaps the most uniquely different taste of the night.   Some of the other restaurants with fantastic fare on hand were favorites’ This Little Piggy Had Roast Beef (“’This Way’ roast beef sliders”, Ditch Plains (“’Ditch Dog’- hot dog covered in macaroni and cheese”), and The Fat Radish (“root vegetable stacks with a date puree”).  Other, perhaps lesser known notables included Spicy Bampa’s sweet and spicy “cold noodle,” Ofrenda’s “albondigas de camaron” or “shrimp balls,” Cascabel Taqueria’s “pollo chipotle tacos,” and Newark, New Jersey’s Sol-Mar Restaurant, who served up a delicious Portuguese-style “shrimp in garlic sauce.”

With over 90 vendors, we obviously could not remain eating for three full hours without getting over-satiated, and some of the places that we had hoped to target, wound up being missed.  But we didn’t pass up the opportunity to wash down the fare with some tasty suds and wine combinations.  We were pleased to find Francis Ford Coppola Winery on hand along with Jim Beam Global Spirits and Wine, pouring out tastings of Red Stag.  On the beer front, we hit the Smuttynose Brewing Company and Vermont’s Magic Hat repeatedly, but also enjoyed Sixpoint for some more local flavor.

Our first experience inside the Village Voice’s “Choice Eats” was a memorable one.  With hundreds of locals moving quickly from station to station, there was a certain palpable excitement in the air as the evening began, before the delicious food wound up slowing everyone down toward the end.  But the opportunity for tasting events of this size simply do not come along all that often, and if you can handle big crowds and perhaps some pushy patrons, it is highly advised that you take advantage of the affordable ticket price for next year’s event.  The Village Voice managed to keep a massive event of this size incredibly well organized, and the restaurants made sure that nobody would leave hungry.