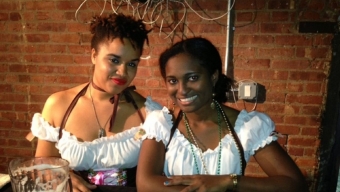 With two wildly successful four hour sessions, Das Best Oktoberfest swarmed the LA. Venue/The Tunnel venue for much of the day on Saturday bringing some of the most delectable flavors of German fare and brews inside the sprawling west side space. Attendees were handed a tasting glass and set loose upon some 150 international craft beers, wines, and even schnapps for each all you care to taste session, bringing together hundreds of likeminded New Yorkers for a fun, filling event continuing the lineage of Oktoberfest centric happenings throughout the month. But for our money, it’s possible that this one was Das Best.

The Saturday evening session kicked off promptly at 5:30. Almost immediately, it became clear that the venue was the perfect marriage of Munich meets New York City as the event would rival any festivity that King Ludwig could have put on himself. We quickly got right into the mix as we were greeted by women in lederhosen right as we walked through the festival doors and were handed an empty glass. Glancing around the room, top German brews like Moo Thunder, Butternuts, Okto, Heavy Seas, Wurzburger, and Leinenkugel’s were just some of the many purveyors passing out suds at the event. The Okto and Wurzburger pours specifically were two that really got our pallet going from the start, but it was the Angry Orchard Cider that we were remembering long after the Oktoberfest had concluded. The apple essence really jumped out and had just the right amount of sweetness you would want from a great cider.

Notable breweries like Sixpoint, Flying Dog, Smuttynose, Blue Point, Allagash sat alongside, the likes of Oskar Blues, Jever, Innis & Gunn, Troegs, and Hofbrau for as eclectic a selection of beers as any recent event. If more suds than you can handle wasn’t enough, the addition of the live oompa & polka band playing in the background added to the ambiance and the authenticity of the traditional German Oktoberfest. To supplement the tastes, Castello was supplying cheese and crackers to absorb some of these finely crafted brews. Meanwhile, just around the corner, we found some of New York City’s finest authentic German food vendors like Schnitzel and Brooklyn’s finest Apartment 138 were whipping up some authentic German style dishes like the famous Brooklyn Bangers sausage which could challenge any German grandmother’s recipe.

Over time, massive events of this caliber tend to be overwhelming. There are simply too many taps to be able to taste everything. But 2012’s Das Best Oktoberfest managed to avoid many of the pitfalls by purposefully underselling the space by roughly 40% thereby keeping lines incredibly short, all things considered. The live music was an added bonus, providing a backdrop for the fun hours spent imbibing, tasting, and chatting up with the breweries and beer distributors. If the Das Best Oktoberfest was the final German themed beer festival of the season, the event planners certainly made sure to send us toward Halloween with a proverbial bang. As well as a startling number of bratwurst burps, which was to be expected.