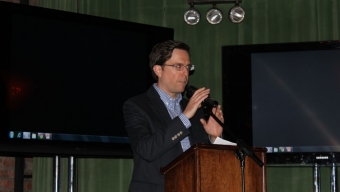 It has been estimated that nearly two thirds of homeless men and women suffer from mental illness or addiction. Even more startling is the fact that most of them receive little to no treatment and are relegated to the perils of living on our city streets. But hope is not lost. Thursday evening, the Lower East Side’s Bowery Hotel was the setting for the 22nd Annual Gala event celebrating Project Renewal, a local nonprofit focused on empowering homeless New Yorkers and giving them the opportunity to start their lives over. With an emphasis on fundraising to keep their imperative initiatives operational, the evening was a celebration of the organization’s successes in turning people’s lives around and regenerating faith where it once seemed hope had been lost.

The program begins with outreach- finding the homeless men and women who need and want help and offering them treatment options in mobile medical clinics. From psychiatric care teams to drug, alcohol, and chemical dependency healing centers, the Project Renewal team offers care and support at times when some of our most needy New Yorkers require it most and offer shelter and even jobs to those committed to turning themselves around. Because the program is so comprehensive however, raising awareness and continually raising money are critical to sustain these treatment facilities and are essential to Project Renewal’s survival.

In that light, the Annual Gala event brought out hundreds of New Yorkers to the posh hotel, with both their hearts and their wallets filled with philanthropy. The three hour event would feature dozens of exciting items and experiences up for grabs in a live and silent auction, with interactive bids placed via BidPal on mobile devices handed out upon entry. Passed around hors d’oeuvres and creative cocktails made their rounds amid the spectacular indoor and outdoor patio space during the cocktail hour, as attendees, finely dressed in suits and dresses began to arrive. A wall of artistic portraits created by some of the beneficiaries of Project Renewal graced the patio’s north side, catching the eyes of most guests pacing the spacious main floor.

With the live auction set to begin, the crowd on hand was then ushered to a private space indoors where the evening’s emcee NBC New York reporter Erika Tarantal would introduce several Project Renewal board members and an especially touching speech by Patrick Lee, a success story extolling the program’s triumphs. Lee addressed the crowd briefly, fighting back tears as he recalled his history of addiction and his days of being destitute. Perhaps most poignant however, was his understanding of hope and the second chance that Project Renewal had offered him, which was incredibly inspiring to the rest of the room.

To kick off the live auction portion of the meeting, Tarantal next introduced actor Ed Helms (The Office, The Hangover) to make a few quips and loosen up the crowd a bit before the auctioneer would ask them for donations. Helms was both engaging and creative, often compelling the crowd to erupt with laughter based solely on his pointed and topical observations of the evening’s goings on, while at the same time expressing how much he values the efforts undertaken by the Project Renewal team and the importance of the cause.. While his time at the podium was brief, the talented actor sat attentively in the front row and even successfully bid on a live auction item during the interactive period. Following the auction, which notably raised hundreds of thousands of dollars for Project Renewal- from a Jets-Colts VIP ticket experience to a trip for 8 people to France- Helms hung around the main floor, conversing with interested parties and generously posing for pictures with fans of his work.

The struggle with addiction is not a problem to be taken lightly. Many of us are privy to its detriments. Be it gambling, drugs, or alcohol, there is always a person that each of us knows that could be just a paycheck away from homelessness. Far too often, we turn a blind eye to situations which fail to directly impact our everyday lives, walking right by the sleeping man on the side street or ignoring the woman pleading with you for change. These are problems not to be ignored because at some point, these people were just like us. Project Renewal is not just an outfit that is tasked with reforming the lives of people that we’ve been too ignorant to help. It’s also about making us aware that as pervasive as homelessness is in our city, it needs our attention. It deserves our attention. And a life on the streets is no longer the only way to live for some of our most impoverished citizens.

For more information on making donations or to find out how you can get involved, you can learn more about Project Renewal here.