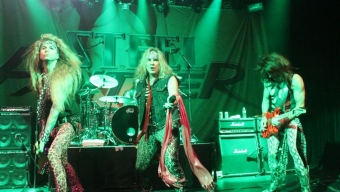 What were you doing on Wednesday night? Maybe hitting the gym or cuddling up with a good book? Well, if you answered yes to either of those, we say stop being so lame! Your pals from LocalBozo.com headed back to New York City’s Irving Plaza to witness the mighty rockers of Steel Panther melt faces and convert first time listeners into fans once again. For years, the four hard rocking, comical showmen of Steel Panther have been dominating the L.A. club scene. But over the course of the past year, they have made New York City their second home with near monthly residencies at Irving Plaza. And with a return date already set for July 18th, you best be scooping up your tickets now.

Steel Panther’s popularity has a lot to do with word of mouth promotion. New fans always seem to share the same story: a friend who saw the guys blow the roof off at the Key Club in L.A. and returned home to spread the good word by blasting the bands albums at a party. Word travels fast, jamming the house at their Manhattan shows with new converts and those ready to experience a Steel Panther party all over again. Wednesday night’s crowd proved to be the most diverse we’ve seen, with all ages represented along with the usual packs of revelers donning ’80s glam attire. We could even spot some death metal fans in the audience who were going ballistic just waiting for Steel Panther to grace the stage. Now that’s what we call a ‘United Nations of Metal.’

Just as the crowd had grabbed that last pre-show beer, the lights went out. With fists raised and a roaring applause flying through the air, ‘Panther’ stormed the stage ripping into, ‘Supersonic Sex Machine’ the first track from their latest release, ‘Balls Out.’ The raucous, futuristic song lit the match on a rock spectacle that would not cease until the lights came back up. The setlist was filled with several choice gems we can’t get enough of. The pre party anthem ‘Tomorrow Night’ and the band’s first hit ‘Fat Girl’ perfectly paced the show’s open while ballad ‘Community Property,’ joined the entire crowd together in unison. Imagine- a sea of New Yorkers proclaiming ‘My heart belongs to you– But my cock is community property.’

About halfway through the set, the boys brought some lovely ladies on stage to party with- many of whom took it upon themselves to perform their own show for the onlooking crowd.  The rock stage turned to sideshow as one girl shoved her entire fist in her mouth to the band’s delight, while others simply bared all, without any coaxing from Steel Panther. All of this feminine celebration caused frontman Michael Starr and company to launch into, ‘The Shocker’ off of their first album, ‘Death To All But Metal.’ The popular tune turned the stage into an all out party, giving those with camera phones another show of their own. The band also pulled out another seldom heard favorite- an acoustic rendition of ‘Girl From Oklahoma,’ a fun clap and sing along tune reminiscent of Extreme’s, ‘More Than Words’- just much, much dirtier.

Whether they are playing stages on the east coast, west coast, or abroad, Steel Panther continues to embody everything we adore about 80s glam metal and everything that’s fun about attending live concerts. Don’t miss your chance to catch the band as they return to Irving Plaza on July 18th for another collaboration of rock music anthems and nonstop partying.  You may not be able to turn back the clock to a 1980′s sunset strip, but the Steel Panther time machine can take you there one show at a time.

Attention all fans! Be sure to stay tuned to LocalBozo.com over the next few weeks for an exclusive backstage interview with bassist Lexxi Foxxx and drummer Stix Zadinia from the mighty Steel Panther. This is a no holds barred, uncensored interview that you just can’t miss. We had a ton of fun shooting it with the guys and we are sure you’ll raise up your horns as well, while laughing your balls off.