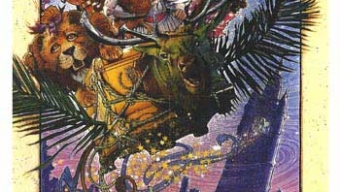 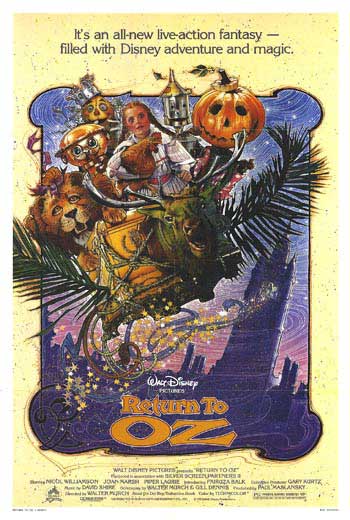 Much has been said about the decade that was the 1980′s. From Pac Man fever to the Superbowl Shuffle, this was the decade of decadence. I was born in April of 1982, and by the time I was five years old, my mind had already been preprogrammed to bow at the alter of He-Man, while sipping on a Slimer green, Ecto Cooler. The kids movies of the 1980s were quite different then they are today.  In today’s world, companies like Pixar create glossy family flicks that leave little to the imagination once the lights go out at night. But, in the 80′s many of the films aimed at children were extremely dark in nature. I am not sure if this was an intentional move, but it sure seems that way in retrospect.

The first film I will chronicle is the 1985 Disney film, “Return To Oz”.  A fair warning for you, the reader this article will be filled with spoilers. So here is your spoiler alert now. Ok, we all good? Enjoy the show.

No matter how jaded you are now, everyone has seen the classic motion picture “The Wizard of Oz”. It’s an all around feel good story, letting us know that home is sometimes the best place to be. This “sequel” is a bird all its own. We have Dorothy now played by a very young Fairuza Balk (The Craft, The Waterboy). In this version Dorothy is treating like a madman for her belief that she was actually in this Wonderful World of Oz, and brought to a gothic-esque sanitarium for shock treatment therapy. So basically, all of that happens even before she “Return’s to Oz.” The whole atmosphere has this dreadful almost haunted vibe to it. One of the nurses, seems to have a problem with Dorothy right away. She seems to have an evil side to her. It mirrors the original film, in the way where you will see many of these doctors, nurses, and patients later on in the film playing different roles.

Dorothy takes her trip to Oz in a similar fashion to the original film, a freak storm. Once in Oz, this Dorothy’s adventure is quite different, and with much less singing. Everything that you knew about Oz from the first film is completely different here.  The place which once housed a world of wonder is now a barren wasteland, with danger at every turn.

Several of the staple characters from the first film have either been completely changed or do not exist at all here. For example, the Tin Man is actually all tin, and completely rusted over.  The idea of an actor in makeup from the first film is thrown out here completely; as each of Dorothy’s supporting characters are either actor’s in full costume or Animatronic Robots.  This is a stark deviation from the Broadway show type feel of the original classic.

One of the most jarring moments of the film can be seen when Dorothy heads deep within Oz, and encounters Mombi, the witch who can, wait for it, switch heads with other people. I guarantee, that this is one of the main scenes in the film that gave children nightmares, me included. The thing is, when Mombi is chasing Dorothy around a castle it is played almost the same as a horror film. If you haven’t guessed it by now, Mombi was one of the creepy nurses in the beginning of the film at the Mental Hospital.

It’s hard to believe that this was made by Disney and marketed to children as a sequel to the squeaky clean original. This piece of 80s camp proves that it was truly a decade where odd choices were made, especially in the world of family cinema. I for one love it. Next time I will review the Tim Burton classic, Pee-Wee’s Big Adventure. Until next time, tell um Large Marge Sent You!